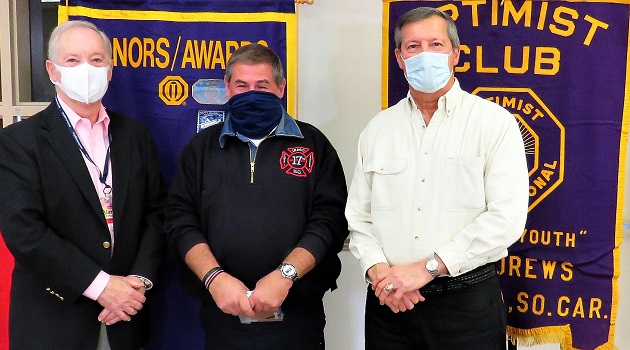 When an Irmo citizen makes a 911 call, more likely than not, a fire truck from the Irmo Fire Department will be the first at the scene. This is in part because the department is geared for speed of response and is also because of the fact there are more fire trucks available than there are ambulances. Once on the scene, the firemen are trained to render advanced first aid. So a fire truck at an automobile accident scene is very common, not necessarily because there is fire potential, but more likely because the department is prepared for, as Haley described it, cases of “what if” and “that’s never happened before.”

Hayley said one ongoing challenge is the reluctance for senior citizens to ask for assistance from the department. He added the hesitancy is because some of those persons have a fear they will be removed from their homes.

Newer issues facing the department are are COVID-related and those involving hybrid and electric car accidents. The fire department is in the communication network that informs the department when a member of a household has tested positive for Covid. There are then protocols to be followed.

In the electric or hybrid car accident scenario, there are enhanced precautions that have to be taken. Those situations present some new challenges, among which are (1) potential for electric shock—taking special care to avoid surfaces that can conduct electricity; (2) runaway high temperatures where there may not be a visible fire; (3) lithium burn hazards; and (4) possible re-ignition up to 24 hours after the initial fire has been extinguished, so when an involved vehicle is hauled away, it must be stored at some distance from other cars.

The life span of a smoke detector is approximately 10 years because of the deterioration of the sensor. To promote the replacement that is necessary, the department offers free smoke detectors. It even stocks detectors for the hearing impaired. Also, if a home has any gas service, natural or LP, it should definitely have a carbon monoxide detector on each floor. The mounting height of the detector is critical, and the department can provide those specifications.

Pictured are Club President Alan Taylor, Brian Haley, and speaker host Bill Byrd who presented Haley with a copy of the Optimist Creed.