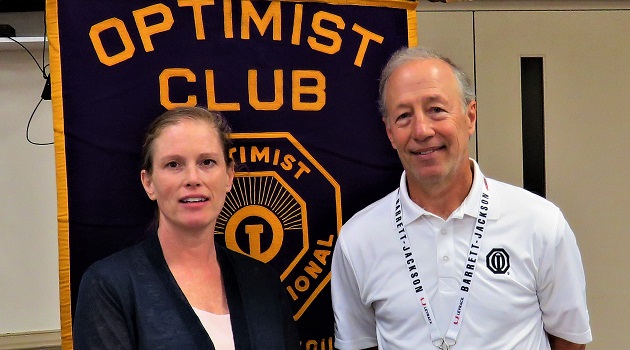 The Optimist Club of St. Andrews-Irmo sustains a long-standing partnership with Palmetto Project and with its outreach efforts that benefit the Midlands. Nell Killoy, Deputy Director for the Midlands and Upstate for the Project, was the Optimists’ guest speaker April 16 where she described two programs that the Club supports.

The first program is the annual Families Helping Families Christmas gift drive. Through this endeavor, thousands of low-income Midlands families receive gifts from several sources, which include individuals, Churches, businesses, and civic organizations. The most visible way the need is literally broadcast is the annual phone bank, situated in a studio at WIS-TV. Every year, WIS constructs a set for the phone bank and then lends air time to the promotion of the campaign. The phone bank is the source of roughly half of all donations.

Donors pledge giving based on the family size they want to help, and they are given information about the family individuals’ genders, ages, clothing sizes, and any other specific needs. The adopting donors then shop for the recipients based on the shopping lists the Project has emailed, then wraps the gifts marked with a locator code, and delivers those gifts to a large warehouse where they are staged for distribution. There are normally hundreds of bicycles donated during this effort. St. Andrews Optimists contribute in a couple of ways: the Club annually renders financial support, and then several Optimists individually adopt families.

Killoy’s second topic, one that St. Andrews Optimists also support, is the My First Books program. Along with the Project’s local partners, there is also a relationship with the Dolly Parton Educational Foundation. Putting books in the hands of children under five is a major influence on early literacy. It is widely understood that reading proficiency is the first key to a good subsequent academic experience. The second element in predicting that success is the participation of one or both parents actually sitting with the child and reading along.