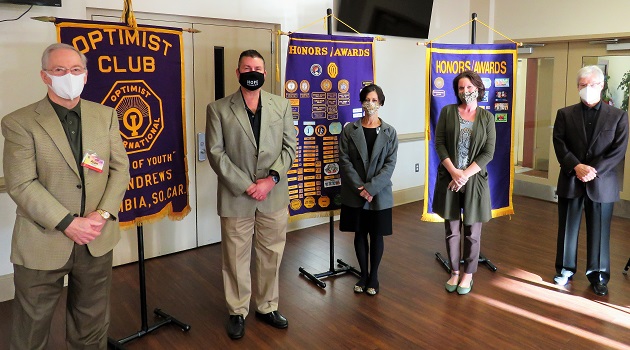 Dr. Todd Crump spoke recently to the Optimist Club of St. Andrews-Irmo. He serves as an Emergency Physician at Lexington Medical Center. Dr. Crump discussed his experiences with Covid patients. Later, he described some of the work the free clinic does in the community.

Dr. Crump has treated hundreds of Covid patients. When he spoke to the Optimists, he had just received his first vaccine injection. He described the experience as highly emotional, given the volume of Covid patients he has seen and treated.

In no particular order, he mentioned some of his observations, both in his prepared remarks and in an extended question and answer period. Dr. Crump reported he had seen a number of patients who had tested positive, who had had felt no ill effects, but who were startled to learn they actually had abnormally low oxygen levels. One of the main goals of hospitalizations is to bring back oxygen levels to as close to normal as possible.

Fibrosis in the lungs is another effect of the virus, and it makes the maintaining of healthy oxygen levels very difficult. Dr. Crump indicated that several months after Covid patients’ releases from hospitalization, fibrosis still shows up on chest x-rays.

While symptoms can vary somewhat from patient to patient, another very consistent one is the loss of both taste and smell. Those two seem to show up together almost 100 percent of the time, as opposed to one or the other by itself.

Dr. Crump endorsed the widely publicized measures citizens should make an ongoing discipline: those being social distancing, frequent hand washing, and wearing a mask when in public. Regarding the distancing approach, it was Dr. Crump’s finding that often there is a high infection rate among people who have recently attended a non-distanced church service or a funeral where distancing was not practiced.

Fast-tracking the approval and distribution of the new vaccines has meant the normal 4-5 year clinical trial, which is routine in normal times, had to be bypassed in the interest of speed. This means collection of information, clinical and anecdotal, will have to trail the actual vaccination campaign. That information – from hundreds of sources – will flow to the CDC for analysis, but Dr. Crump believes the CDC will make its evaluation public only after Covid numbers are trending down.

Dr. Crump then shifted topics to his work with the free clinic. He was first attracted to committing to the clinic after a visit there that was recommended by a colleague. The free clinic renders medical treatment to patients who would otherwise receive no attention to their issues. They come from the ranks of both working and non-working poor. In addition to receiving patients, the clinic also prescribes and supplies about $4.5 million in medications per year.