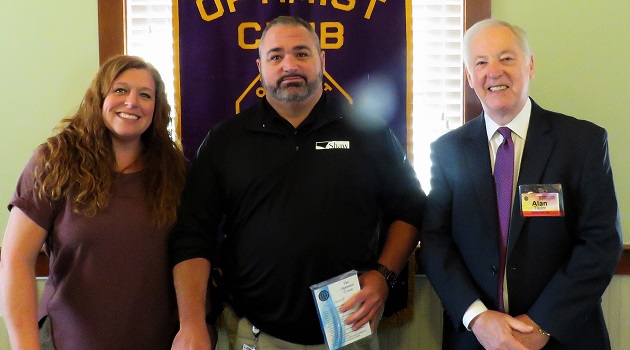 Dale Sexton, Plant Manager at the Shaw Industries Irmo facility,  spoke to the Optimist Club of St. Andrews-Irmo May 14.

Sexton has been in his current position for three and a half years, and serves on the Board of Directors of the Greater Irmo Chamber of Commerce. Further, the plant has ongoing relationships  with several area high schools.

Formerly Allied Chemical, then Honeywell Corporation, the Shaw facility is one of six located in the Southeast, all owned by Berkshire Hathaway. The Irmo plant manufactures carpet fibers. Sources for raw materials are pre-made pellets that arrive in bulk form, either from original sources or from plastic bottle recyclers. The Irmo plant has even begun recycling scrap materials from its own production processes. The cooling water used by the plant comes from the Saluda River and is returned to the River downstream having been purified.

The plant is the workplace for a large number of blue-collar workers. The tenure of that workforce stretches from some veterans with more than 40 years’ service to new hires. Sexton said one of his top priorities is cultivating new hires to replace retiring veterans and replenishing the workforce because of normal attrition. The relationships Sexton has formed with high schools is one vital source of employees. Typical working hours are fourteen 12-hour shifts per month.