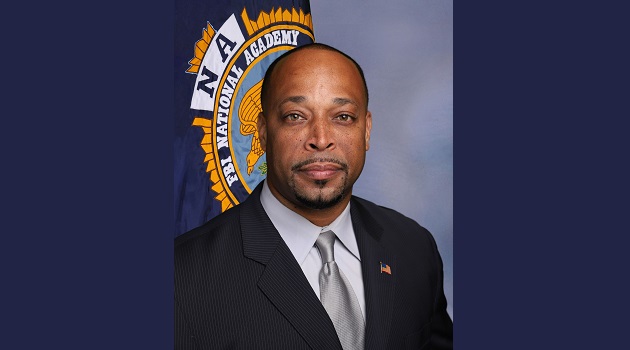 RCSD Captain becomes one of the fewer-than-one percent

“The training was intense physically and academically,” says Goggins. “Easily one of the best experiences of my life.”

Established in 1935 and developed by both the FBI and U.S. Marines from Marine Corps Base Quantico (of which 547 acres have been allocated for the FBI National Academy), the academy was established “during the height of the gangster era,” says Goggins, and out of necessity for the standardization of law enforcement agencies nationwide.

In 1935, the initial class of 25 students immersed themselves in the law enforcement sub-disciplines of criminal investigation techniques, scientific aids in crime detection, report preparation, and administration and organization. During World War II, courses in espionage and sabotage were added, according to the FBI’s website.

Today, approximately 1,060 law enforcement leaders are hand-picked by their respective agency heads to attend one of four 265-student FBI National Academy classes each year. That initial agency selection is only the first phase of the overall selection process. Those candidates who ultimately make the cut include a sizable percentage of international students from foreign law enforcement agencies.

The annual numbers, including the number of living alumni, are fewer than one percent of all executive-level law enforcement leaders, nationwide. And less than one percent of sworn RCSD officers are graduates of the FBI National Academy, which includes Sheriff Leon Lott who graduated from the academy in 1988.

“The FBI National Academy was truly one of the most rewarding and professionally enhancing academic experiences I’ve had, and so it’s key for me to have a core group of academy graduates commanding and directing all operations here within our own department,” Lott said.

Goggins says he’s “grateful and humbled” to have been chosen.

“Why me? As you well know, the Sheriff makes decisions based on necessity and vision,” says Goggins. “There are so many deeply experienced professional officers here at RCSD that I would have to say any one of us could have been selected. Fortunately, I was one of the few.”

The FBI National Academy is as physically challenging as it is academically. For instance, Goggins recalls the grueling 6.1-mile obstacle course known affectionately as “the yellow brick road.” Built decades ago for the FBI by the Quantico-based Marines, the yellow brick road features a variety of obstacles to be negotiated including walls, simulated windows, sheer rock faces requiring a bit of climbing and rope work, a cargo net as well as running through icy creeks and crawling through muddy water beneath barbed wire. Upon completion of the now-famous O-course, academy candidates receive a commemorative yellow brick.

“The entire academy program was a life-altering experience that very few are selected to participate in,” is how Goggins describes the FBI National Academy, if for no other reason than those he met and befriended in the proverbial shared-hardship. “I met the world’s best, and within 10 weeks we became family. We continue to communicate daily – professionally and personally. It feels good to have such a strong worldwide support system within reach via email, phone call or text message. It is special.”

In addition to his more than 20 years of service with RCSD in varying capacities, Goggins is a former U.S. Army Reserve soldier.