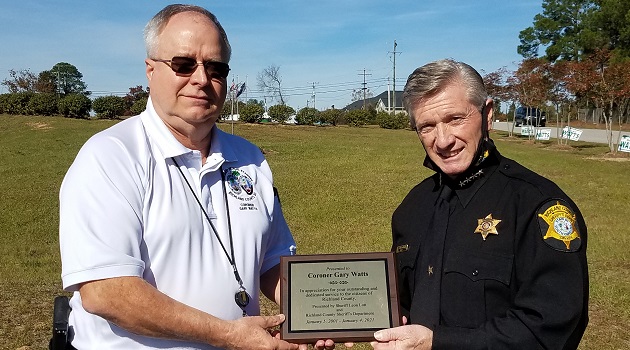 “I’m honored to have watched you [Watts] take the Coroner’s Office and bring it up to the high level it is today,” said Lott in making the presentation. “But I am more honored to call you my friend. You were my friend 20 years ago. You’re my friend today, and 20 years from now you’re still going to be my friend.”

Watts received several additional awards, including a S.C. Senate Resolution which was recently introduced on the floor of the S.C. Senate by Sen. Darryl Jackson, a letter commending his service from U.S. Congressman James Clyburn, and a plaque expressing appreciation from Loretta Coleman Ministries.

A former police officer, emergency medical technician, investigator for the Richland County Public Defender’s Office, and deputy coroner (prior to serving as coroner), Watts served two terms as president of the S.C. Coroners Association. He helped establish the nationally recognized C.A.R.E. Team for Richland County. S.C. Gov. Mark Sanford tapped Watts to serve on the S.C. Domestic Violence Review Team Task Force. And Watts served as both vice pres. and pres. of the Internal Association of Coroners and Medical Examiners among other professional posts.

Among those joining Lott for Watts’ presentation, Tues., were several RCSD investigators including Criminal Investigations Chief Stan Smith, other deputies and officers, as well as sworn officers and other members of the Coroner’s Office.