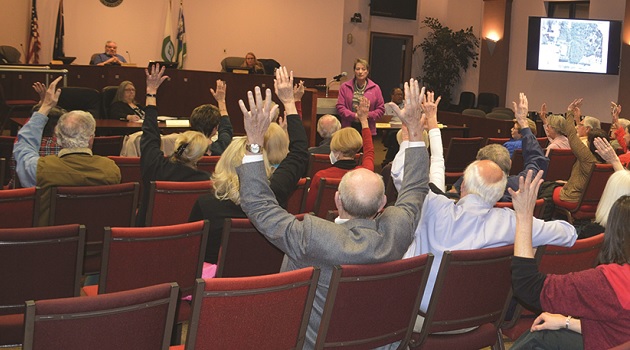 It’s somewhat different than a previous plan that failed to win zoning approval from the town of Irmo.
The earlier plan called for 74 townhomes. The new plan reduces that number to 66. Instead of townhomes they would be detached, patio style homes.

But complaints continued to surface as some 50 residents from the area showed up to hear a presentation on the plan at Irmo’s Municipal Building March 3. Concerns were raised about the possibility of bottle-necked traffic, street parking, and a single street exit.

The new development arises next to neighborhoods with elderly residents, said one citizen.

“Change is hard for old people.”

But Southern Homes officials responded that the residential plan would have much less an impact on the community than what could come later. Zoning for commercial development instead of residential would produce much larger traffic problems.

Town officials say approval for the new proposal remains uncertain, but the council has already given first-reading approval to the zoning classification of single-family residential for the tract. Second reading is expected to come up at the next council meeting.

Irmo Councilman Bill Danielson said he anticipates approval of the zoning request, but won’t be casting a vote. He said he has recused himself from the vote because he has received campaign contributions from Southern Homes.

He said the issue before council is the appropriateness of the zoning, not the multiple issues that arose during the presentation.

Irmo Town Administrator Courtney Dennis had a similar view when asked about the next steps for the plan.

He said the various concerns raised by citizens could be addressed through zoning regulations, building codes and other guidelines followed by the town of Irmo.

The council’s pending action on the zoning classification is just “the first step” in addressing the plan, Dennis said.

The new homes would be approximately 1,636 square feet and include an enclosed garage on a small lot with landscape buffers.

The homes will be expensive. Estimated costs per unit are projected to start at around $250,000.

At the beginning of the meeting, Southern Homes CEO Mike Satterfield spoke about the long-time relationship between Southern Homes and the Irmo community, where his business is headquartered.

Southern Homes has developed several residential neighborhoods in the Irmo community during the past several years. During his career, Satterfield said his company has built more than 16,000 homes.

He was well aware that new neighborhoods worry people.

“You all probably don’t want us here. But ideally, it will be something that works for the town, works for us and for you.”