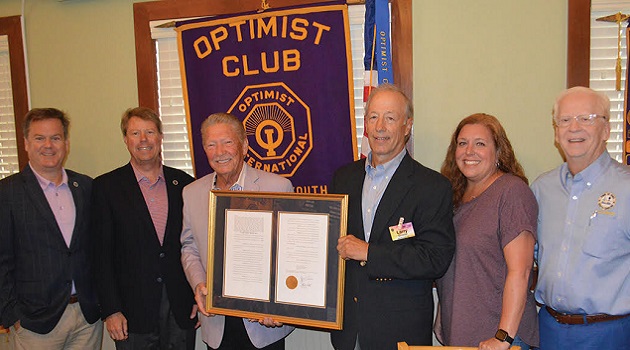 The St. Andrews Optimist Club has provided community service for 50 years and on Friday, August 6 they celebrated that milestone at their meeting in the Lizard’s Thicket on St. Andrews Road in Irmo.

Kenneth Shuler was the featured speaker and has been a member of the club for 49 years. “We began the club with 28 members and over the years the quality of our membership has sustained,” said Shuler. “Our commitment to the community remains the same and will continue for another 50 years.”

Don Keating is the oldest member of the group at 89 years of age. Alan Taylor is the president but was unable to attend. Larry Blosser ran the meeting Representatives Chip Huggins and Nathan Ballentine presented a proclamation from the State House featuring some of the accomplishments that the club has made over the years.

Councilman Bill Danielson from the Town of Irmo congratulated the group saying “thank you for all that you do and have done because you are very much appreciated by the Town of Irmo.”

Today the club has 40 members.