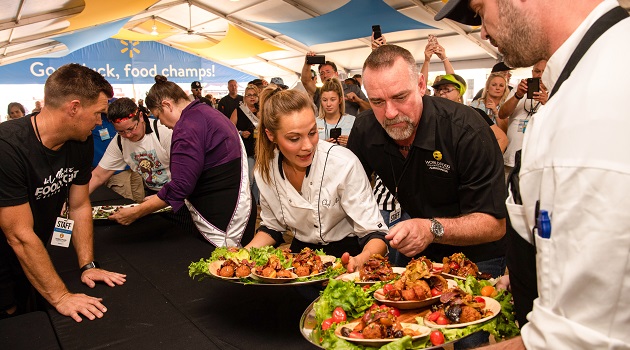 The destination best known for its Palmetto trees and fishing activities is about to turn up the
heat, as it hosts the largest culinary competition in Food Sport. The World Food Championships (WFC) will host its finale in Lake Murray Country, South Carolina this April, where one cooking team will reel in a first-place victory and a $100,000 grand prize.

Often billed as the “Ultimate Food Fight,” WFC’s “Final Table: Columbia” will conduct three
South Carolina-based cooking challenges for ten finalists from around the country, all of whom finished first in their respective categories this past November at the Main Event in Dallas.

Lake Murray Country, known as the Jewel of South Carolina, is composed of Lexington,
Richland, Newberry and Saluda Counties. Long known for its access to outdoor recreation, it
was Lake Murray Country’s emerging culinary scene that caught the eye of World Food
Championships CEO, Mike McCloud.

“Lake Murray Country is a foodie’s dream destination and the perfect host city for our Final
Table. From Bar Figero in Newberry to Blue Marlin in Columbia, there is no shortage of great
restaurants and phenomenal chefs,” said McCloud.

Final Table: Columbia will be held from April 30 through May 1, and like previous Final Tables,
the 2021 finalists will participate in an elimination process. This process narrows the ten
Finalists to five, then three, and ultimately one winner.

For its first challenge, the ten contestants will be tasked with creating their best dish featuring biscuits, grits and peaches. Each cook will be required to use Adluh flour, which is the South Carolina state flour, as well as Adluh grits in their dish. Additionally, the finalists must incorporate Lake Murray based Titan Farms peaches.

The second task is a brand new culinary challenge for the Final Table. Not only are the five
finalists who advance to round two expected to create a delectable dish for the judges, but they must also catch it. The Catch and Cook Challenge will test these finalists’ angling skills as well as their cooking skills as they hit the water bright and early to catch one of the abundant species of fish native to Lake Murray waters.

For the final challenge, the three remaining finalists will be tasked with creating a dish that will be added to the menu of South Carolina’s McCutchen House. The McCutchen House, built in 1813 and located on the University of South Carolina’s historic Horseshoe, serves as a training ground for UofSC students embarking on a career in Hotel, Restaurant and Tourism
Management.

To kick off the Final Table weekend, Lake Murray Country will be hosting a “FREE Family, Food
+ Fun Outdoor Expo” on Saturday, April 30 at Boyd Plaza, Columbia Museum of Art. The expo, which will be held from 10am-3pm, will feature dozens of interactive exhibits, food trucks and fun for the whole family, including the ten champions who will be sampling 1,000 biscuits. “Biscuits with the Finalists” will occur from 10am-11am, while supplies last.

Click here to book your stay with the Final Table: Columbia group rate.

The ten champions who will compete at the Final Table include:

About the World Food Championships

The World Food Championships (WFC) is the highest stakes food competition in the world. This multi-day, live-event culinary competition showcases some of the world’s best cooking masters competing for food, fame and fortune in ten categories.