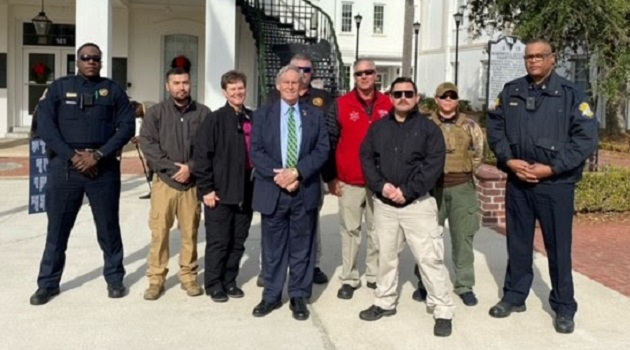 I am grateful for the opportunity to have begun the new year by touring the district and talking to the media about my legislative focus areas for 2022.

Joined by city and county officials along the way, our stops included West Columbia, Aiken, North Augusta and Barnwell. In each location, I spoke about the current challenges before us, reviewed some key accomplishments in 2021, and then, shared highlights of my goals moving forward.

Unfortunately, since Biden took the oath of office on January 20, American families have suffered under Democrat policies, destroying jobs. As a result, our country faces unprecedented adversity.

Appeasement in Afghanistan leading to 13 American heroes being murdered, the abandonment of Americans in the country, and establishing Afghanistan as a safe haven to attack American families. The effects of the free-spending policies of Democrats, including the Biden-supported, multi-trillion-dollar spending bill, more accurately dubbed ‘Build Back Bankrupt,’ will only further contribute to the 40-year high inflation rate. These wasteful expenditures will saddle our children and grandchildren with unimaginable debt and destroy jobs, while for older Americans, the Biden policies are crushing retirement accounts, undermining Social Security and compromising Medicare. Biden inflation policies have increased costs, wiping out wage gains, destroying jobs. Former United Kingdom Prime Minister Margaret Thatcher was correct, “Socialism will work until you run out of spending other people’s money.”

Nonetheless, throughout these challenges, there were several positive and welcomed congressional actions taken in 2021 which represent valuable steps forward. Here are a few highlights of legislation I introduced or supported last year that became law:

Much remains to be done, but I am committed to the people of South Carolina’s Second District and will continue to work hard to keep us all safe, promote jobs and help make our lives and communities stronger.

Photo: Congressman Wilson with the assisting law enforcement officers at the Barnwell stop