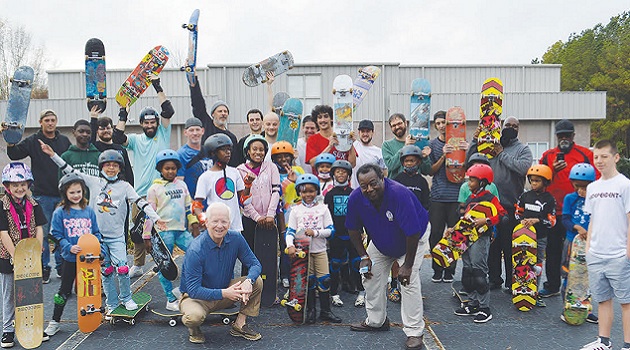 Beyond the Board skateboarder program draws community support

Whether learning to carve, alley-oop, boardslide, blunt or tic tac, local youth from the Irmo area are engaging in an after-school program that uses skateboarding as the primary tool to bring positive and enriching activity to those who are most underserved.

As part of the after school program ULSA, Universal Leadership Stem Academy, “Youth Zone” directed by Dr. Alonzo Johnson and Dr. Richel Johnson, the event ‘Beyond the Board’ was held at the Universal Outreach Church of God located at 220 N. Royal Tower Rd. in Irmo on Saturday, Dec. 11.

Donned with their ‘brain buckets’ children involved in the ‘Youth Zone’ and others from around the community gathered to learn technique and basic skateboarding from local enthusiasts and professionals. Mayor Barry A. Walker Sr. along with Mayor Pro-Tem Bill Danielson encouraged the children as they learned fundamentals from David Toole, owner of Bluetile Skateshop at 621 Harden St., who donated the skateboards. Toole is on the skatepark committee to create a facility in Irmo and was involved in building Owen’s field Skatepark.

As the children became more comfortable, soon they were pairing off with more advanced‘ boarders’ and their pleasure was obvious. Chris Johnson, the owner of Jersey Mike’s in Murraywood shopping center, donated lunch for the kids while Todd Comalander from Comalander and Associates on St. Andrews Rd. bought helmets and pads. Other businesses that donated were Mike Nieri of Great Southern homes who made a generous donation and Lowe’s managers John and Jason in West Columbia who gave a 50% discount on lumber needed to build ramps. Councilman Bill Danielson paid for the materials from Lowe’s and Academy Sports in Harbison donated a $50 card used to purchase 2 sets of larger pads for older youth.

The Youth Zone children are picked up from seven local schools after school. The program is free for kids that live in the Youth Zone. They provide tutoring, hot meal daily, and bring the children home by 6 pm.

David Toole, the owner of Bluetile Skateshop, instructs Youth Zone kids on the basics of skateboarding.

Feature Photo: Irmo Mayor Barry A. Walker, Sr. and Mayor Pro-Tem Bill Danielson with the Youth Zone kids at the ‘Beyond the Board’ event held at Universal Outreach Church of God on Saturday, Dec. 11.