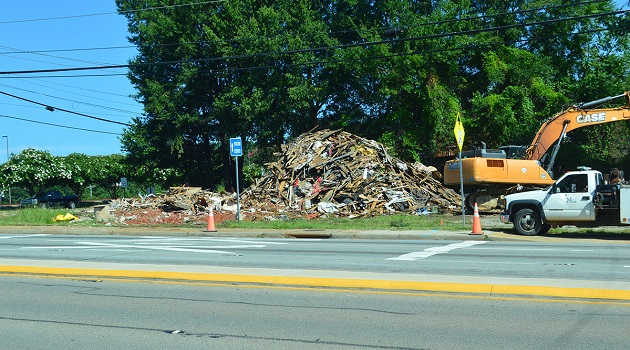 On July 12 the iconic Irmo eyesore was finally razed in the middle of town. The nearly century-old building had a long and somewhat boring run as the centerpiece of Irmo but held the spot at the major intersection of Lake Murray Boulevard and St. Andrews Road for generations of Irmese.

Built-in the 1930s to serve as a market for construction workers as they toiled on the Dreher Shoals Dam, the brick and wood building became a furniture store during the ’40s and stayed that way until the late 90s.

Standing abandoned for nearly two decades it would become adorned with campaign signs during election seasons and has often become a point of contention. Town council members and citizens who wanted it removed and those who defended its right to remain often clashed over its future.

Efforts to make it a registered historic building never materialized and every time it looked like it may be coming down something would delay the process. Recently, it was the discovery of asbestos in the roofing and drywall which stalled the demo until remediation solutions could be reached.

Often ticketed for breaking code enforcement of the town for a dilapidated building or disrepair, the owner of the building would either pay the fines or defend himself in court. Even a past mayor of Irmo weighed in on the building’s demise and ended up in an ethics commission battle which was later dismissed.

“It’s been a long time in coming and we’re happy to see it go,” said Councilman Bill Danielson. “The town is working feverishly to develop some type of main street corridor that would reflect the quaintness of the Town of Irmo and this was a positive step forward.”

Plans for the site are being discussed as a drive-thru Domino’s Pizza. Conception plans have been given to the town but no permits have been requested at this time.