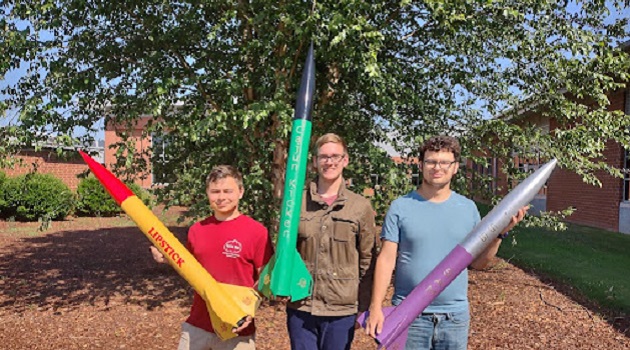 The three students who participated in the event were members of Cwiakala’s RocCATS. They included Samuel Pacific (Spring Hill High), Zachary Moore (Spring Hill High), and Seth Trochesset (Irmo High). These seniors participated in The American Rocketry Challenge, also known as TARC, and devoted two years to competition and study. At TARC they designed a rocket that lifted an egg to a defined altitude in a specified time and returned it to the ground safely. They completed their aerospace journey with the Sport Launch to earn their Level 1 High Power Rocket certifications. This is typically not done at the high school level, more often being completed at the college level.

Level 1 High Power Rocket certification involves constructing and flying a rocket cable utilizing an H-class engine.  Most model rockets flown by hobbyists typically utilize A- through C-class engines. Each engine class letter indicates an impulse power level, with subsequent classes being twice the power level of the previous class. A B-class engine is twice as powerful as an A-class. This makes an H-class engine 32 times more powerful than a C-class motor. The rockets flown were 4-inch diameter and over 40-inches tall. Students had their rockets inspected by the Range Safety Officer and had to satisfy a 13-point checklist. The rockets were flown and deployed a recovery system which returned the rockets safely to the ground. The rockets achieved altitudes ranging from 2200-ft to over 2700-ft. The flights were witnessed by a Level 3 High Power Rocket certification holder John Hochheimer and appropriate documentation was completed and submitted to NAR. This certification will allow students to build and fly rockets suitable for I-class engines. This is something that will be beneficial should they wish to compete in college rocketry competitions, such as the one Cwiakala will be judging in New Mexico in June.

Cwiakala, The Center’s teacher of Aerospace Engineering and advisor for the RocCATS, oversaw the students’ progress while earning his Level 2 High Power Certification. The requirements for his certification are similar to level 1 but more advanced. The rocket must be flown on a J, K, or L impulse motor. A J-class motor was used which is 4 times more powerful than an H-class. Prior to the certification flight, a 40-question exam is given that covers topics of applicable regulations, rocket motor designations, range and safety practices, and rocket stability. A score of 35 out of 40 questions is required for passing. Once passing the test, the rocket is inspected and flown.  Because the engine is so large, altitudes are achieved that require a recovery system allowing the rocket to fall to lower altitudes before deploying the main parachute. Cwiakala flew with a J316 engine which took the rocket to over 4700-ft. The rocket separated at apogee (highest point) and the nose cone and body, which are connected with an 8-ft shock cord, fell. The separated configuration slows the descent to a speed at which the parachute can be safely deployed. Attached to the shock cord was a 36-inch parachute, that until deployment was kept closed using a Jolly Logic Chute Release flight computer. This device has a band that goes around the parachute to keep it closed. When the rocket reaches a predefined altitude (500 feet) it releases the parachute allowing for a slow safe landing. Cwiakala’s flight was witnessed by John Hoffmann (HPR level 3) and Robert Carson (HPR level 2).

Should the students wish to continue in rocketry competitions at the collegiate level, the Spaceport America Cup is one such competition. Held at Spaceport America, in Truth or Consequences, New Mexico, college students compete from around the world flying rockets that lift a payload to 10,000 or 30,000 feet. This year’s competition will be held from June 21-25. For more information visit spaceportamericacup.com.