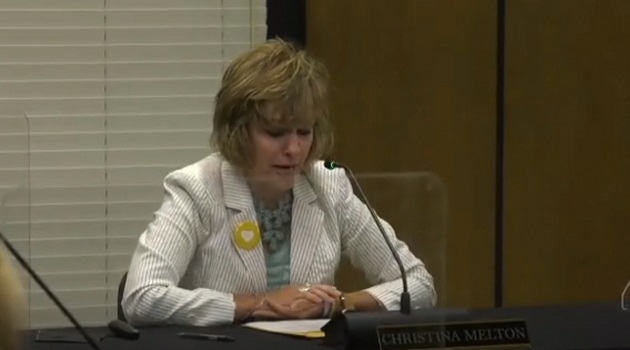 The announcement came during a board meeting in which she was recognized by the board for her selection as Superintendent of the Year for South Carolina. Her family was present as she was presented flowers honoring her service.

Melton announced she was stepping down at the end of Monday’s school board meeting, after board members met in an executive session. She did not give a specific reason for resigning.

Board Chairwoman Jan Hammond said after the meeting that Melton had the support of the board.

“The board did not force her out,” said Hammond.

Melton asked for a meeting with the board in executive session, which was listed as a “contract” matter on the agenda. She advised the board she had decided to resign.

Hammond acknowledged Melton and board members at times were at odds and Melton apparently had different expectations about her job. Some new board members have taken office since she took the position in 2017.

Hammond also noted Melton had to weather some difficult times during the pandemic regarding re-entry plans that had parents and teachers at odds with the district. She advocated a more cautious re-entry plan than many parents sought.

Given her successful career, Hammond said Melton would likely be a sought-after candidate for jobs in the education field.

Board member Ed White has a different version of the circumstances surrounding Melton’s resignation.

During Monday’s meeting, White showed his displeasure with the way the board handled the resignation by announcing his own resignation from the board, then walking out of the meeting.

White was later contacted by The Irmo News and asked for an explanation.

He responded with a statement saying he was very upset the board had pressured Melton to resign.

“Last night I resigned from the School Board of School District Five of Lexington and Richland Counties. I felt that it was the only action that I could take to express the serious nature of my objection to the way our board has decided to conduct the public’s business.”

He went on to say that his fellow board members signed a secret settlement agreement with Dr. Melton to terminate the Superintendent’s contract without a public vote.

“They wanted to present the false façade that she had resigned and keep it from the public until after the school year adjourned, ostensibly to avoid the criticism they would receive for their actions. I refused to sign the agreement.”

White said a majority of members of the board imposed a hostile work environment on Melton making it impossible for her to succeed.

“Then they demanded that Mrs. Melton, the Superintendent of the Year, resign. There was no basis for terminating her employment. I felt that this was wrong, unfair, and not in the best interests of our district, community, teachers, and students.”

Melton made the resignation announcement at the end of Monday’s school board meeting, after board members met in an executive session.

In a public statement, Melton said: “This message is a bittersweet message to write because of my love for our district. This is home. We are family. I am a strong believer in seasons of life, including career. My season as superintendent is drawing to an end on June 30, 2021. As I prepare for this new chapter in my life, I thank the Board of Trustees for the privilege to lead School District Five. I thank our families, our community, and especially our students. I am grateful to the staff of School District Five. I am convinced the brightest, most talented, capable, and caring professionals are concentrated here in our district.”

Melton said the district has rallied in times of crisis.

“We have shared strength during weakness and we have seen the unprecedented. We have been a voice for our children, our community, and our profession. We have been tested and have proven to be resilient and student-centered. I leave this chapter knowing the people in place will continue exemplary work focusing upon our most important resource… our children.”

Melton came to Lexington-Richland Five in 2007 as the principal of an elementary school. She became the district’s director of elementary education and chief instructional officer before she was appointed superintendent. In 2019 she was making a salary of $182,000 a year.

In a statement released on behalf of the district’s Board of Trustees, Vice Chairman Ken Loveless said:

“Dr. Christina Melton has advised the Board of Trustees for School District Five of Lexington & Richland Counties of her resignation as Superintendent, effective June 30, 2021. The board expresses its appreciation to Dr. Melton for her dedicated efforts on behalf of the students and staff of the District since she was appointed as Superintendent in 2017 and wishes her well in her future endeavors.”

The board plans to schedule a special-called meeting to discuss selecting an Interim Superintendent to lead the District beginning on July 1, 2021.