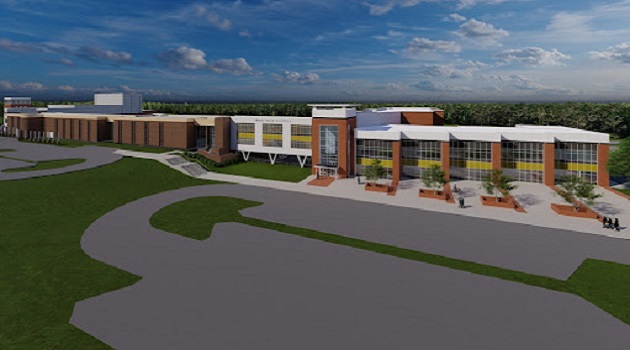 The Lexington-Richland School District Five Board of Trustees voted at its October 24, 2022, meeting to approve the Preliminary Master Site Plan and Phase I Schematic of Irmo High School’s East Wing replacement.

The new east wing will provide a modern look with more than 60 new classrooms, a media center, and administrative offices in a 120,000-square-foot three-story structure. An area dedicated to the history of the school, known as Pride Hall, will be re-established in the new wing.

“It has been a priority of the Board to further enhance the reputation of Irmo High School, which is a flagship school in the district,” Board Chairwoman Jan Hammond said. “Since I began my career at Irmo, it is only fitting that my last board meeting and act as chair was the vote to renew my beloved Irmo High. I know this renovation will spark new energy and joy into the Irmo Strong community. We have worked hard to make this project a reality. I look forward to the day it opens.”

The project will be completed in four phases beginning with the east wing replacement, followed by Phase 2, which includes an area for a new Cafeteria Student Center. Phase 3 is dedicated to the creation of a new program for students who want to learn how to start their own business called the Small Business Incubator. Phase 4 will focus on west-wing improvements. The project is expected to break ground in late 2023.

The current cost estimate of Phase 1 of the project is $55.4 million.  The Board originally allocated $49 million for the building and voted at the October 24th meeting to add $3.5 million from the FY 2021 fund balance carryover for a total of $52.5 million.  District administration has outlined options for the additional $3 million needed, but more specific pricing details will not be determined until the final schematic designs are completed.

“We are elated to be at this stage of the creation process for the new wing of Irmo High School,” Irmo High School Principal Dr. Kaaren Hampton said. “This new addition will shift not only the landscape of our campus but the culture of our school and community.”