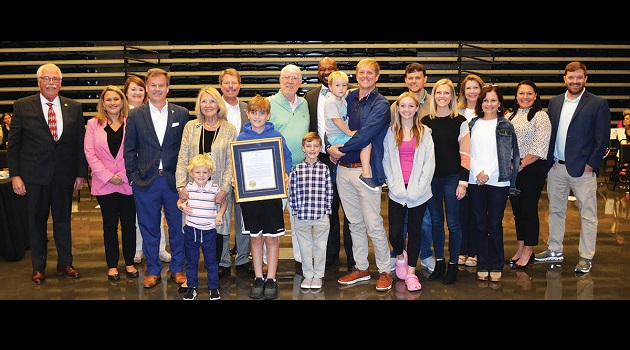 Jan Hammond, Board Chair of Lexington-Richland School District Five, is retiring from the board of trustees at the end of her term in November. Her last school board meeting as Board Chair was on Monday, October 24.

Mrs. Hammond has served in some capacity to the district since 1973 and was elected to the board in 2002. Her steadfastness to obtaining accountability and transparency was often met with opposition during her tenure until recently when the board voted to move forward with a long awaited procurement audit. The audit is showing discrepancies and shedding light on past boards and decisions made.

Hammond graduated from Winthrop University, received a Masters in Teaching from USC and began teaching as a social studies teacher and cheerleading coach at Irmo High School.

Jan and her husband, Ed, have raised three children.

Photo: Jan Hammond with husband, Ed, and family along with District Five Board of Trustees at the October 24 District Five school board meeting. Representatives Chip Huggins and Nathan Ballentine presented a Recognition and Commendment from the House of Representatives to Jan during the meeting.