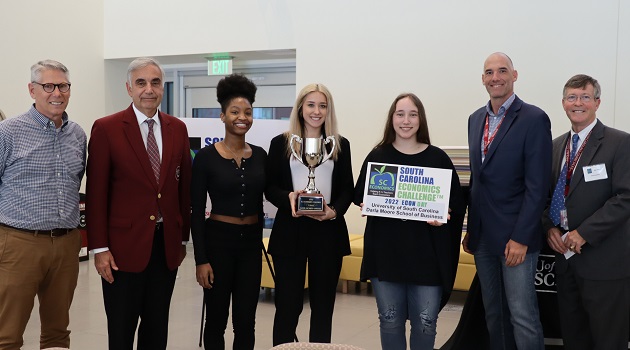 The SC Economics Challenge is a state-wide competition open to high school students in grades 9-12. There are two divisions, Adam Smith for AP/IB students, and David Ricardo for on-level Economics students. School District Five students all placed in the David Ricardo division.

“I am so proud of our students,” FIVE economics teacher Kurt Stiglbauer said. “This is the first year I’ve been at FIVE and my first opportunity to see the amazing students who attend this school. This year’s seniors were especially hard-working in their preparation for the competition. They researched, practiced, and specialized in different areas in preparation for a competition that requires understanding of macroeconomics, microeconomics, and current economic events. I’m especially impressed that they were able to work together as a team when they had never met each other physically. They know what’s going on with the economy today, and showed it during the Econ Challenge.”

Students were tested in economics in three categories: microeconomics, macroeconomics, and current economic events to determine the top two teams that would face off in a quiz-bowl-style round with buzzers, a live audience, and judges that included University of South Carolina (UofSC) President Harris Pastides and other UofSC professors. Winners took home cash prizes, a trophy, tee shirts, and a state championship. Other events of the day included sample lessons and activities with USC economics professors, pictures, and lunch and discussions with a panel of business students from the university.

By winning at the state level, the students move on to the regional competition, held between May 7-10, with the hopes of advancing to the National Finals in New York City.