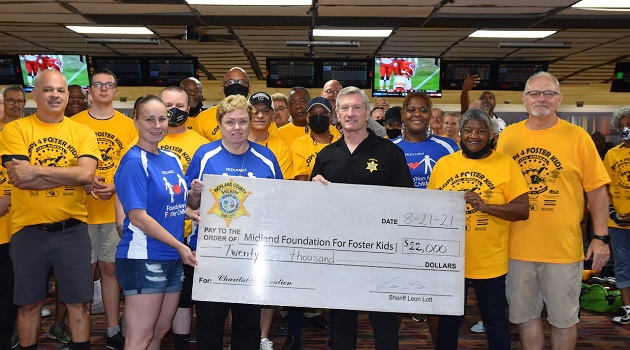 The 17th annual COPS 4 FOSTER KIDS bowling tournament – aimed at improving the lives of foster children in Richland County – netted more than $23,130 this year, beating the previously held 2019 record of $21,000. The tournament was held, as it is every year, at Royal Z Bowling lanes in Dentsville, Sat., Aug. 21

Planned, directed, and hosted by the Richland County Sheriff’s Department (RCSD), the tournament’s proceeds as well as separate donations coinciding with the event were presented to the Midlands Foundation for Foster Children. The foundation serves children across central S.C., primarily in Richland County who have been placed in the custody of the South Carolina Department of Social Services.

RCSD Capt. Cole Porter, tournament director who also serves on the board of the Midlands Foundation for Foster Children, agrees.

Donations of $250 and less were also received from companies and individuals many of whom are RCSD employees.

“This tournament and the purpose behind it is something that is near and dear to all of us,” said Lott. “And that’s why it is so successful year after year.”

No tournament was held in 2020 because of COVID.

2021-09-03
Previous Post: Wilson calls for resignation of Chairman of the Joint Chiefs of Staff General Mark Milley
Next Post: Larry Haltiwanger endorses Tifani Moore for the school board