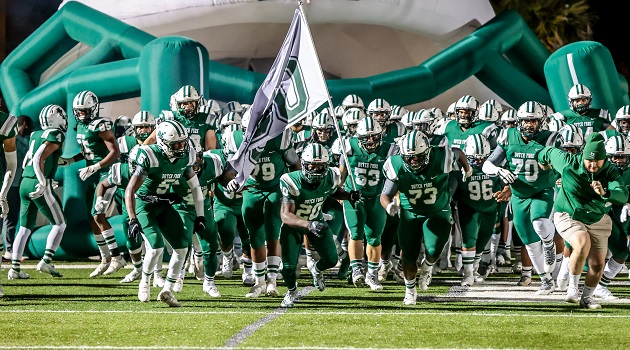 Dutch Fork aims for next championship

The Dutch Fork varsity football team will play for the state championship again, this time at Benedict College’s Charles W. Johnson Stadium at 5 pm on Saturday.

Dutch Fork’s Silver Foxes will take on Gaffney in this year’s 5A finals after defeating Fort Dorchester (FD) 21-14 in last week’s lower state championship game. The FD Patriots were — like Dutch Fork — undefeated going into that game.

Gaffney won last week’s upper state title with the 56-31 win against Spartanburg. At 14-0 overall for the season, the Indians are also undefeated and riding a 14-game winning streak for the year.

According to South Carolina High School League (SCHSL) records, Gaffney currently holds the distinction of having won the most state titles. With 16 titles recorded, those wins go back as far as 1927 and extend to the 2012-2013 season when the Indians last won the state championship.

That last Gaffney state title came with a win against Dutch Fork, and the Silver Foxes then won the 2013-2014 state championship with a win over Sumter. At the time, then new, DF head coach Tom Knotts was at the helm in both state finals games. He still is.

Now the Silver Foxes are going for their seventh varsity football state championship, one as a 4A team and five as a 5A team. Dutch Fork has won every 5A state title since the 5A classification was created in South Carolina high school sports.

For those going, the Charles W. Johnson Stadium is located at 1920 Two Notch Road, and the 5A state title game featuring Dutch Fork and Gaffney will be the last in a three-day run of varsity football state championships. Class 4A plays Thursday at 7 pm, then 2A and 3A teams play on Friday, followed by the 1A championship and finally the 5A finals at 5 pm Saturday.

The SCHSL says general admission tickets are $15 and sold at gofan.co online. Tickets will not be sold at the (game) site.

Parking will cost $10 per car, cash only, and there is a list of additional information at schsl.org after following links to the football state championship games.