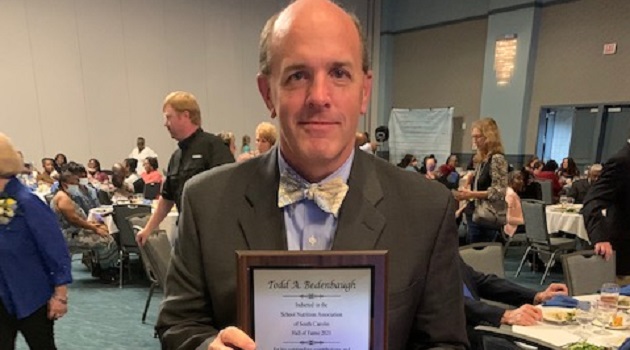 Executive Director of Operations inducted into Hall of Fame

The award recognizes employees and industry members that have provided extraordinary contributions to school nutrition programs. Mr. Bedenbaugh was inducted into the Hall of Fame on October 16, 2021, in Myrtle Beach, South Carolina. He is the fifth person named to the Hall of Fame.

“It is a tremendous honor to be named to the School Nutrition Association of South Carolina’s Hall of Fame,” Bedenbaugh said. “I have been blessed to be a student nutrition professional for the past 25 years. I work with a great team of Student Nutrition staff in School District Five and I am grateful for their support!”

Mr. Bedenbaugh works tirelessly to ensure that School District Five is providing quality food and customer service to students. Under his leadership, School District Five is the only district in the nation to receive back-to-back $100,000 USDA Farm-to-School grants, he implemented the new “Farm to Five: Communities Thrive” program in 2016 that focused on gardens and greenhouses at three schools. Students have planted kale, broccoli and cucumber seeds and then harvested crops to be incorporated in school menus. Bedenbaugh received funding from the SC Department of Agriculture to send teachers and staff on field trips to local farms and make upgrades to several school gardens. Continuing to grow his department’s local sourcing efforts, Bedenbaugh worked with an agricultural educator, Kevin Sox and students to start a small farm in the summer to begin growing broccoli for the district that became Good Agricultural Practices (GAP) certified. School District Five was the first district in the country to implement a food truck for Summer Feeding to reach more students during the summer months when students are at home and not at school.

Bedenbaugh started the District Five Education Foundation Golf Tournament to raise funds for the District Snack Pack Program that provides nutritious food for students who do not have enough food to eat through the weekend and he created the Back-to-School Bash that provided school supplies for District Five students. For the last four years, he organized a district-wide and state-wide Chopped contest to introduce students and employees to the culinary field for the School Nutrition Association and for the district. Bedenbaugh held the position of South Carolina SNA President for the 2016-2017 and the 2006-2007 school years. He formed the annual Dr. Vivian B. Pilant Scholarship Golf Tournament and has raised over $40,000 for School Nutrition employees and their dependents to receive scholarships to attend college.

Mr. Bedenbaugh received the Southeastern Regional Director of the Year Award in 2018 by the National School Nutrition Association representing 12 states.

“Mr. Bedenbaugh’s passion for his job, our students and District Five are represented in the number of positive programs and events he has spearheaded over the years,” said Interim Superintendent Dr. Akil E. Ross, Sr. “He is a great example of someone that is invested in the well-being of our students and high-quality service for the entire state of South Carolina.”