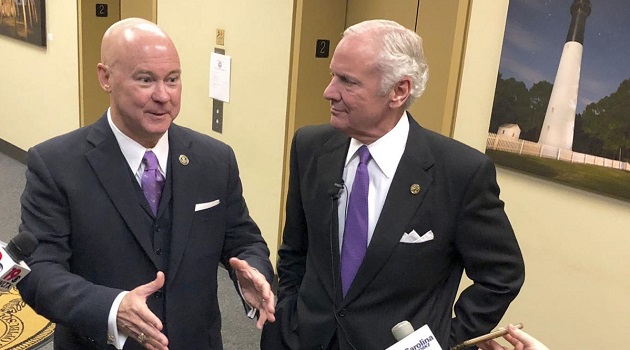 Several years ago when global expedition leader and future S.C. Floodwater Commission Chair Tom Mullikin suggested to me and a few others close to him the idea of seven wonders of South Carolina – and what those seven wonders might be – we knew he was onto something. He always is, and his ideas are always inculcated with an unusual spirit of adventure and they are not infrequently unique.

Mullikin’s recent POWERPLANTSC wherein he conceived, planned, and directed the planting of some 3.4-million pine tree seeds and saplings across S.C. in a single day, Apr. 22 – and yes, setting a national record in so doing – is a perfect example. He did so to enhance the natural beauty of S.C. for generations to come, and as a means of helping mitigate future floodwater threats to the Palmetto State (we’ll save that for another story).

Mullikin is “that guy” who, as nationally syndicated columnist Kathleen Parker once wrote, “finishes Christmas dinner, then takes off to scale Mount Everest, conducting business by satellite phone to check progress on his plan to build an ocean reef upon his return.” Parker’s is perhaps the best, most-accurate, description of Mullikin I’ve read.

A former U.S. Army officer, retired two-star commander of the S.C. State Guard, university professor, lawyer, and so much more, Mullikin has spent much of the last four decades traversing every continent on earth, climbing mountain ranges of the world’s seven tallest peaks (including reaching the summits of more than 20 mountains across the globe), logging SCUBA dives in all the world’s oceans – often leading special operations soldiers on his expeditions – earning a berth in the S.C. Black Belt Hall of Fame, jumping out of airplanes with several foreign airborne forces, and once running a competitive campaign for U.S. Congress.

Mullikin is quite simply an adventurer. He also cares deeply and knows quite a bit about the world’s most fragile ecosystems, which is one of the reasons S.C. Governor Henry McMaster tapped Mullikin to head the state’s newly established Floodwater Commission in 2018 following a spate of disastrous flood events in S.C. beginning with the infamous 1,000-year flood of 2015.

Mullikin’s leadership of the Commission has been nothing short of phenomenal, establishing it as a model for other states across the U.S. and frankly flood-prone regions around the world.

I know first-hand, having served on the executive team of the Commission’s National Security Task Force, one of 10 named-task forces (subcommittees) since 2019.

So when Mullikin launched his statewide SOUTH CAROLINA SEVEN (SC7) expedition in July 2020, I knew he was onto something. This year’s expedition, the second-annual SC7 which began July 1, 2021 in Oconee County and will conclude in Charleston on July 30, has convinced me and others that this annual event covering several hundred miles on foot, by raft and kayak, even SCUBA diving, from the mountains to the sea will in-time become as much a part of S.C. as the “derby” is to Kentucky. Not the same of course, but nothing about what Mullikin does, is.

SC7 – as the brand-title implies – showcases the seven natural wonders of S.C., including Sassafras Mountain, the Jocassee Gorges, the Chattooga River, the Congaree National Forest, the Edisto River, the ACE (Ashepoo, Combahee, Edisto) Basin, and Bull Island-Cape Romain National Wildlife Refuge: “Each one a unique geographical treasure,” according to Mullikin.

Participants along the trail venturing from one “natural wonder” to the next and key historic destinations between each have so far enjoyed trailside fireside
chats and site-explanation discussions led by experts ranging from conservation, resiliency, adult and childhood fitness, outdoor therapy, floodwater-mitigation issues, even ecological theology. “This is the Lord’s garden,” says Mullikin.

Participation has been equally remarkable with the list of those joining Mullikin so far reading like a who’s who among the state’s chiefs and luminaries: Everyone from Gov. Henry McMaster, who met up with Mullikin in Newberry earlier this month when the expedition stopped for a premiere showing of Mullikin’s documentary film HIGHER GROUND at the Newberry Opera House, to Lt. Gov. Pamela Evette, S.C. Supreme Court Justice John Few, S.C. Sen. Thomas Alexander and numerous state representatives, mayors, and county and city council leaders.

Also hiking during SC7’s stretch through the Midlands in mid-July were Richland County Sheriff Leon Lott, the National Sheriff of the Year 2021; Col. Steve Vitali, a celebrated U.S. Marine commander of the wars in Iraq and Afghanistan; and Bruce Brutschy, director of the S.C. Black Belt Hall of Fame. Then there were, are, and will be numerous organizations like Palmetto Pride, Boy Scouts, Girl Scouts, Girls Who Hike, the S.C. Department of Natural Resources, Explore Charleston, the S.C. Ports Authority, various S.C. State Parks, historic battle sites, and local tourism agencies, the S.C. National Heritage Corridor, the National Parks Service, and Global Eco Adventures (GEA), Mullikin’s non-profit.

Dr. Mike Langston, a retired U.S. Navy captain and currently serving S.C. State Guard brigadier general, has been leading daily devotionals for SC7. Langston also serves on the faculty of Columbia International University. Retired Brig. Gen. Darlene Marie Goff, the first female brigadier general in the history of the S.C. National Guard, has been with the expedition for much of its trek along with husband Col. Eddie Goff. Brig. Gen. Goff has been “blogging” about SC7 nearly every day since joining the expedition a week or so into it. And Maj. Gen. James E. Livingston, USMC (Ret.), recipient of the Medal of Honor, will receive GEA’s IRONMAN award at the SC7 finish-line event, July 30.

What’s the point of it all? “Four points,” says Mullikin. “This state has just as much to offer, just as much intrinsic beauty, and just as much adventure as any of the most remote destinations you will find and experience anywhere else in the world, and it’s all within a half-day’s journey.”

If nothing else, Mullikin is generating a newfound awareness of all four.

2021-07-30
Previous Post: Rogers receives Order of the Palmetto
Next Post: Live a longer, happier life with the right medical team