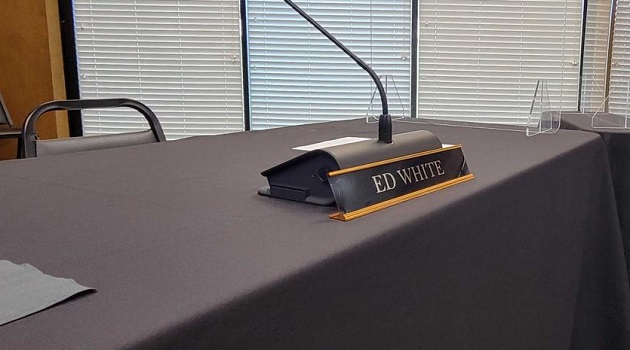 Former school board member Ed White was censured by his colleagues on the Lexington Richland District Five School Board at Monday’s board meeting.

In his announcement on June 14 that he was resigning, White made a public statement asserting that the board forced the resignation of Superintendent Christina Melton by creating a hostile work environment.

The board has denied that Melton was forced to resign.

At Monday’s meeting, Board Chair Jan Hammond said, “Our board should be operating in accordance with policies.”

White’s actions show “he disregards the trust” of fellow board members, she said.

Board members Matt Hogan and Rebecca Blackburn Hines voted against the censure.

Hines said she is not in agreement with White’s actions but a censure is not necessary since he is no longer serving on the board.

Hammond and board members Ken Loveless, Catherine Huddle and Nikki Gardner voted in favor of the censure.

On June 17, the school district released a statement criticizing White’s current status as a board member. His resignation from the board will not be effective until July 14.

“As a current Board Member, Mr. White is charged with the duties and responsibilities to uphold his office as an elected official, until such a time as his resignation becomes effective,” the statement said. Those responsibilities include “maintaining the confidentiality of matters discussed in executive session, among other ethical principles.”

The Irmo News was unable to get a response from White on Tuesday.

The strong community support for Melton, recently named South Carolina’s Superintendent of the Year, was evident at Monday’s meeting as a group of supporters presented the board with a box full of tributes to Melton from more than 500 staff members and teachers from across the district. The tributes included cards, a portrait and other mementos.

“We stand before you tonight to honor Dr. Melton in front of the board and our community,” Dutch Fork High School teacher Ali Hendrick said. “To say that many of us were shocked after the June 14 board meeting was an understatement. After a year of hardship and challenge, it left many of us feeling confused, angry and heartbroken.”

The board has named Dr. Akil Ross interim superintendent, beginning July 1. He is a former Chapin High School Principal and National Association of Secondary Schools Principals (NASSP) 2018 National Principal of the Year.