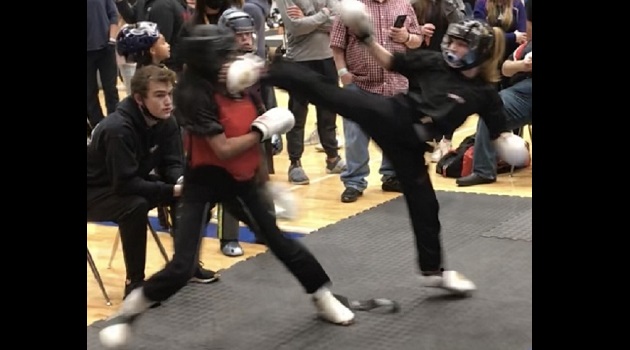 An Irmo Middle School sixth-grader earned two world karate titles at the North American Sport Karate Association (NASKA) 2021 awards banquet in Chicago on January 20th.  Nora Hanson was awarded  Overall Grand Champion in the 10-11 year-old Girls Black Belt Sparring division and World Champion in the 11 and Under Girls Open Weight Sparring division. In 2021, Ms. Hanson competed at NASKA-sponsored tournaments in Nashville, Orlando, Atlantic City, Minneapolis, Miami and twice in Atlanta.  She won first place in five of those tournaments and second in the other two.

Ms. Hanson earned her black belt in karate from Genova Family Karate in March 2021.  She has trained with Mike Genova for seven years.  She is also supported and trained by many other local sport karate athletes and instructors from around the southeast.

Ms. Hanson will compete in the AKA Warrior Cup in Chicago this week and the WAKO USA National Championships in Nashville next month.

Ms. Hanson is a straight A student at Irmo Middle School who enjoys playing soccer and violin in her spare time.

2022-01-20
Previous Post: David’s Fine Jewelry, recognized as the Irmo Small Business of the Month
Next Post: Airplane goes down in Lake Murray