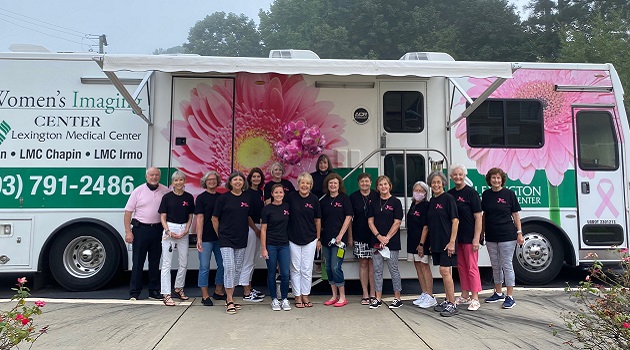 On Wednesday, September 15, 2021, Jan’s Van (The Lexington Medical Center’s Mobile Mammography Van) was at Union United Methodist Church in Irmo, SC. Jan’s Van had reserved 19 spaces for ladies to receive a mammogram and because they have had such a great response, Jan’s Van has been scheduled for 2022, on Wednesday, September 28. Mark your calendars! Spaces are limited, so be sure to contact Jane Davis at [email protected], to make your reservation.

Jane Davis was inspired to bring Jan’s Van to Union United Methodist Church because Jan’s Van is named after Jan Croft, whom was a big part of Jane’s life. Many of the ladies that helped with establishing Jan’s Van, would call her “a great friend” as well.

Jane stated, “Jan had a huge faith and she had been in Bible study with her for like 25 years and they were also neighbors.”  Jane had joined Sarah’s Circle, a group at Union United Methodist Church, because of her and they became great friends.  “She felt that Jan was admirable when she was diagnosed with breast cancer, because she fought really hard.  After the passing of Jan, about two and a half years ago, she still left a huge hole in our hearts,” Jane said.

Jane knew that some women were forgetting about scheduling their mammograms and some were just, too busy to go.  She really wanted to help people by making sure they scheduled their appointments and reminding them to get checked. In doing so, this allowed Jane and her volunteers from Union to reach out into the community.

Stacie Atkinson, one of Jane’s volunteers stated, “Jan’s Van at Union United Methodist Church created a door that opened this program to the community at large and so we were able to go to local apartment complexes and talk to the apartment managers about the importance of being involved and spreading the word.”

Jan’s Van has been scheduled to return to Union United Methodist Church, on Wednesday, September 28, 2022. Spaces are limited, so be sure to contact Jane Davis at[email protected], with any question and to make your reservation.