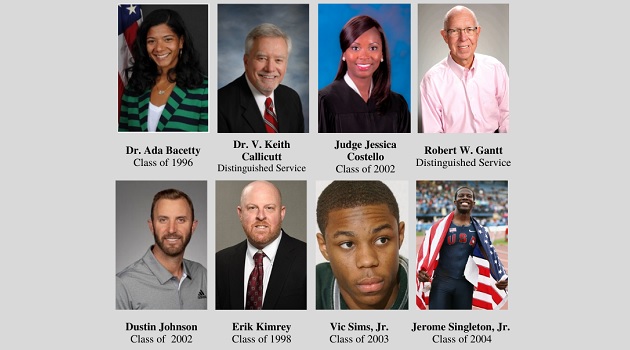 “Dutch Fork’s motto “Enter to Learn, Go Forth to Serve” will be celebrated during this inaugural event as we recognize eight outstanding individuals that continue to take our motto forward.,” said Dutch Fork High School Principal Dr. Gerald Gary. “Each inductee has left his or her mark on our special community.”

Dr. Ada Bacetty is a 1996 graduate of Dutch Fork High School. Dr. Bacetty is the Department Chief for the Biological Threat Reduction Program of the Department of Defense Cooperative Threat Reduction Program at the Defense Threat Reduction Agency. Most recently, Dr. Bacetty has held positions as a Director for USDA’s Foreign Agricultural Service and Senior Policy Advisor for the Chairman of a House Appropriations Subcommittee. From 2008-2016, she served in various roles within the Department of Defense (DoD), to include International Scientific Program Manager, Country Officer, Team Lead, Branch Chief, and Program Manager. Prior to her DoD career, Dr. Bacetty was a USDA-ARS research scientist conducting studies focused on host-pathogen interactions, mycotoxins, nematology, and pathogen detection. She has authored numerous publications and presented at several national and international fora. Dr. Bacetty holds a Bachelor’s degree in Biology from South Carolina State University, a Master’s in Biochemistry and Molecular Biology from Georgetown University, and a Ph.D. in Plant Pathology from The University of Georgia.

Dr. V. Keith Callicutt served as the first principal of Dutch Fork High School and was given the opportunity to help plan for the opening of the school. During the planning phase, he began to stress the importance of developing the “Fox Family” to everyone who would listen. The initial “Fox Family” was built on a commitment to academic excellence and involvement in athletics and extra-curricular activities. Dr. Callicutt’s career in education spans five decades. During that time he served with distinction for four years as a teacher, four years as an assistant principal, twelve years as a high school principal, one year as a Director of Secondary Education, twenty years as a Superintendent, and four years as the Executive Director of the Pee Dee Education Center. Over the past forty-five years, he has been nominated for state principal of the year, recognized by the South Carolina House of Representatives for outstanding leadership while serving as superintendent of Newberry County schools, and received special recognition for leading the Fort Mill School District to a successful 90 million dollar bond referendum, building four new schools over a five year period while leading the district to national recognition as one of the most effective school districts in the United States. Most recently, Dr. Callicutt was selected as 2021 Alumnus of the Year at Francis Marion University, receiving the Professional Industry Award in Education.

Judge Jessica Costello is a 2002 graduate of Dutch Fork High School. Judge Costello was appointed on March 29, 2019 by the Governor of Florida to serve on the Hillsborough County Court bench. She presides over County Civil and Domestic Violence Injunction matters. Subsequently, she was appointed by the Governor and First Lady of Florida to serve as a member of the Florida Children and Youth Cabinet, the mission of which is to improve the self-sufficiency, safety, economic stability, health and quality of life of all children and youth in Florida. In 2020, she accepted an appointment to the Florida Supreme Court Criminal Court Steering Committee. Prior to her judicial appointment, Judge Costello proudly served her community advocating for victims as an Assistant Statewide Prosecutor with the Florida Attorney General’s Office. In this role, she managed local, state and federal law enforcement teams in the prosecution of organized crime throughout the state with a focus on counter-terrorism, gangs, human trafficking, drug trafficking and fraud. She has spent the majority of her career in the field of criminal prosecution and has tried cases ranging from misdemeanors to complex multi-defendant criminal matters to capital homicide. Judge Costello has served as a member of Florida’s Anti-Terrorism Task Force and the FBI’s Joint Terrorism Task Force Executive Committee. She has also worked with community leaders and non-governmental organizations to engage and inform the public about issues related to crime in our community. Recognized for her commitment to equal justice under the law, she was named Florida’s Gang Prosecutor of the Year in 2015. She has been named a Top Government Attorney by Florida Trend since 2014 and was named to the Tampa Bay Business Journal’s “Up and Comers” Hall of Fame in 2016. She was named a “Woman of Color Leading Change” by the YWCA of Tampa Bay in 2017 and received the University of Florida’s Outstanding Young Alumni award in 2018. In 2020, Judge Costello was recognized for her leadership and service as an Honorary Inductee into Florida Blue Key, the oldest and most prestigious leadership honorary in the State of Florida. At the beginning of 2021, Judge Costello was named an “Honorary Commander” of the MacDill Air Force Base 6th Air Refueling Wing in recognition of her commitment to civic leadership and will serve in this role for a two-year term.

Robert Gantt has served School District Five of Lexington & Richland Counties in numerous ways since 1982. He strongly believes in the public school system. Serving as president of the Irmo Elementary Parent Teacher Association (PTA) for two years, chairperson of the IES School Improvement Council (SIC) for one year and also a member for four additional years, a member of Dutch Fork Elementary SIC for two years, member of Irmo Middle Parent Teacher Student Organization (PTSO), chairperson of the Dutch Fork Middle SIC for two years, chairperson for the Dutch Fork High School SIC during the first three years the school was open, member for four years, member of the Parents Advisory Cabinet, Calendar Committee, Building Committee, Strategic Planning Committee, Personnel Committee and Fine Arts Committee. He was elected to the School Board in 2000 and held his seat for 20 years. During his tenure, he served as Board secretary, vice chairman and chairman. Gantt was instrumental in the 2008 bond referendum and construction, ensuring proper facilities for students and staff. Mr. Gantt was the first School Improvement Council Chair at DFHS for the first three academic years. Additionally, since 1994, he has called Dutch Fork baseball and basketball and football games. Gantt enjoyed being the “Voice of the Silver Foxes” for the next 20 years alongside the “Eyes of the Silver Foxes,” Butch Barnhart. Mr. Gantt’s many years of service are truly a labor of love for District Five and its students.

Dustin Johnson is a 2002 graduate of Dutch Fork High School and was an integral member of the 2002 Class 4A state golf championship team. Johnson attended Coastal Carolina University and was a two-time First Team All-American, leading his team to a 5th place finish in the 2007 NCAA Championships. Realizing his dream, Johnson turned pro in 2008 and has excelled at all levels. He has 27 career professional wins, including the 2016 US Open and 2019 Masters. He was the PGA Tour player of the year in 2016 and 2020, the Fed Ex Cup Champion in 2020, and has been the number one ranked player in the world for a total of 135 weeks, ranking 5th all-time.  Johnson has more than $70M in career earnings on the Tour during his 13-year career.

Erik Kimrey is a 1998 graduate of Dutch Fork High School where he played quarterback under long-time head coach and his own father, Bill Kimrey.  While at Dutch Fork, Erik set five state passing records as a senior and was named the state’s Offensive Player of the Year in 1997.  Dutch Fork is also where he met his wife, Erica. He attended the University of South Carolina (UofSC) where his legend continued to grow. He successfully completed a fourth-down touchdown pass which proved to be the game-winner in an upset win over Mississippi State during the 2000 season.  Kimrey graduated from UofSC in 2002 as a three-time letter winner at quarterback, and then served as a graduate assistant for two years under Lou Holtz. From there he spent 17 seasons as the head coach at Hammond School in Columbia, where he guided the Skyhawks to a state record 12 state titles while compiling an overall record of 194-20.  He also taught philosophy and physical education at Hammond. In December 2020, he was named the Tight Ends Coach at UofSC under Head Coach Shane Beamer. Despite this successful career, he will tell anyone that his greatest accomplishments are his family and the relationships he’s made over the years at Dutch Fork, Hammond, UofSC, and in these communities.

The memory of Vic Sims, Jr. will forever be engrained in the memory of the Dutch Fork High School community. Vic was a 3-year swingman starter for the DFHS Varsity basketball team.  He earned All-State basketball honors, was the first 1000-point scorer in DFHS basketball history, and led the DFHS Varsity basketball team to its first-ever region title and Class 4A title game in 2003. Vic’s life was cut short at the age of 18 in April 2003, due to an enlarged heart, a condition called “cardiac arrhythmia.” In 2004, Vic’s parents, Patricia and Vic Sr., joined forces with the non-profit organization “Heartfelt,” founded by Holly Morrell, whose goal is to bring awareness and use of early detection methods to prevent sudden cardiac arrest. Through this organization, “A Heart For Sports – The Vic Sims Foundation,” was started to bring in volunteer doctors and machines to perform mass heart screenings for local student-athletes at their schools. These screenings include electrocardiographs and ultrasound tests. Dutch Fork High School was the first school to receive these screenings with many more to follow. Though it has been 18 years since Vic’s passing, his legacy continues to live on at DFHS, where his jersey and pictures are framed in the school’s Athletics Hallway.  Stories of how Vic’s namesake foundation helped to recognize and diagnose heart defects with student-athletes in the surrounding areas still circulate in papers today.

Jerome Singleton, Jr. is a 2004 Dutch Fork High School graduate. He was only 18 months old when doctors amputated his right leg below the knee because he was born with only a partial tibia. Instead of being slowed by his situation, Singleton has and continues to race through life. He studied at Morehouse College, where he double-majored in Mathematics and Applied Physics, transferring to the University of Michigan to complete his dual degree with Morehouse and add an industrial engineering degree to his resume. Internships with NASA and CERN (the European Organization for Nuclear Physics in Geneva, Switzerland) have also been part of his stellar research work. In 2007, Singleton competed at the US Paralympic National Athletics Championships in Atlanta, securing a place on the US Paralympic team. He began to build an international reputation at the 2008 Paralympic Games in Beijing, where he won a Silver medal in the 100m and helped the US secure Gold in the 4x100m relay.  Singleton found himself firmly in the spotlight when he beat reigning champion Oscar Pistorius (South Africa) to win Gold in the Men’s 100m at the 2011 IPC Athletics World Championships in New Zealand. Singleton has one very important mission: change the perception of the term “disabled” one person at a time.

2021-09-27
Previous Post: Haley Griggs will be an asset to Richland-Lexington School District 5
Next Post: Jan’s Van at Union U M C on Sept. 28th