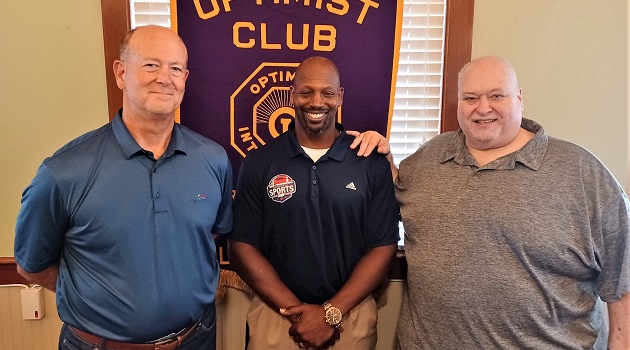 On July 22, Everette Sands was the featured speaker at the breakfast meeting of the Optimist Club of St. Andrews-Irmo. Sands is a veteran football coach who also is ranked Number 2 all-time at The Citadel in career rushing yardage.

Sands related that during his football coaching career, he had often heard from athletes the belief that athletics was their only way out of a future that they feared would otherwise be unremarkable.

So five years ago, he established the W.E.S. Foundation to address that concern. The foundation name is an acronym for “Working Equals Success,” and it stresses not only the athletic aspects of a student’s life, but also areas such as citizenship, discipline, academics, and community involvement.

The Foundation conducts a one-day, all-day camp, with a faculty of accomplished athletes whose expertise lies in the areas of football and cheerleading. The most recent camp was held on June 25 at the Conway Recreation Center. There is no charge to the athletes who attend, thanks to local businesses who donate funds.

At the camp, athletes are coached on the finer points of their specialties from a technique standpoint. They also attend lectures focusing on life beyond athletics. The Foundation produces webinars, the most recent of which have covered financial literacy, social media, and mental wellness.

Sands said his vision for the future of the camps is to begin to add other sports, such as tennis, golf, basketball, baseball, and soccer.

Pictured are Club President Mike Myers, Everette Sands, and speaker host John Manjounes, who presented the speaker with a copy of the Optimist Creed.