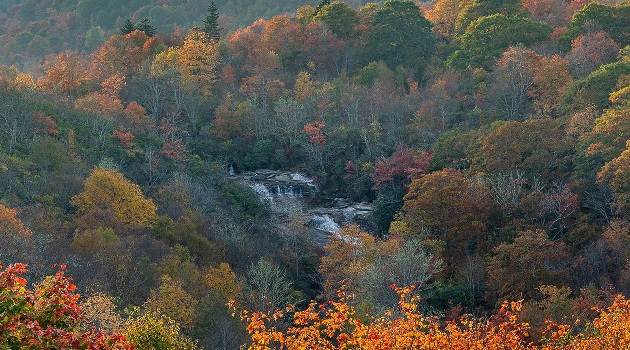 Stage is set for fall colors

Rain blew in sideways and fog obscured the valley below as summer drew to a close along the Blue Ridge Parkway, but Don Hagan could clearly see potential for a brilliant fall color season ahead.

The forest ecologist has been making fall foliage predictions for Clemson University for nine years and, from an elevation of almost 5,500 feet near Devil’s Courthouse mountain on the western edge of Pisgah National Forest, there was no evidence of drought stress and a full canopy of leaves remained on the deciduous trees — those that shed their leaves annually — around him.

“We’ve had plenty of rain this summer, so the trees are happy,” said Hagan, associate professor of forest ecology in Clemson’s Forestry and Environmental Conservation Department. “We’ve also been lucky that we haven’t had any major windstorms. It’s really windy right now, but I’m talking about events such as Hurricane Irma in 2017 or Hurricane Michael that clipped us in 2018 — those kind of storms that come through right at the beginning of the fall color season and blow the leaves off. We haven’t had that, so the stage has been set.”

And that was the foremost reason Hagan said he saw what it takes for a full spectrum of fall colors in the southern Appalachians this year: all the leaves were still on the trees.

“It seems silly to say, but the first prerequisite condition that has to be in place is the trees have to go into fall with leaves,” he said on Sept. 20, the penultimate day of summer. “And you might think that would be a given, but in reality it’s not. In many years you have really dry conditions, particularly in the latter part of summer, and the dominant tree species will drop a lot of their leaves before you even get to fall.”

Yellow-poplars and birches, for example, are species notorious for sensitivity to drought stress. When species such as those that comprise an abundant part of the canopy begin to drop their leaves before summer ends, it puts a ceiling, or cap of sorts, on the potential of the fall color season.

No such limitations exist in 2021.

Perhaps just as importantly for those hoping to see vivid hues this fall, the forecast for the days to come called for bright and sunny, but cooler, weather. Such a smooth progression from one season to the next, Hagan said, is the ideal recipe to produce them.

“What we always like to see is a nice transition from summer into fall with a series of mild cold fronts,” he said. “Maybe you get gray, rainy weather for a day or two and then it opens up and you get some nice, cool, bright, sunny conditions. And that’s really what triggers the chemical reactions that bring out the brightest colors in the leaves.”

Each tree species has its own combination of environmental factors that causes the leaves to change color and ultimately fall. For most species, it’s a blending of shorter days and cooler temperatures that brings about the change.

But some species such as sourwood and black gum rely strictly on photoperiodism — the ability of plants to measure the length of a day — and the timing of their color change is hardly influenced by the weather forecast at all. Those species had begun to show color by mid-September, as they do every year.

“For a lot of other species — your oaks, maples and so forth — day length is less important; it’s more temperature and moisture that’s going to trigger the color change,” Hagan said. “Yellow-poplar is the same way. That’s why fall color can be difficult to predict: because the weather is such an important factor that influences when it happens and how vivid it is.”

Along with those mentioned, cherry species are also among those most dependent on weather. Especially at higher elevations, a species called fire cherry can serve as a particular indicator.

“You can come up here on Sept. 20 one year and fire cherry is still green; you come up the next year and it’s all bright red. And that’s just differences in weather from one year to the next. So, many of your common species are very, very sensitive to the weather conditions — and that’s going to influence both the timing of their change and the brilliance of their colors,” Hagan said.

And this year, there wasn’t excessive rain in the summertime but also no drought, leaving the trees with a mostly full set of leaves. But just because the conditions had set the table, Hagan said there was work still to be done for a delicious meal to be served, so to speak.

A return to warmer temperatures could serve as an environmental message to the trees that growing season is still ongoing, rather than send a signal that fall is afoot. And so long as they have plenty of water and the temperature doesn’t drop, the leaves of some species may stay green a little longer.

“What that could potentially lead to is a slightly longer fall color season — not a short, compressed one — with a slightly later-than-normal peak,” Hagan said. “Fall color could be delayed a couple days later than average. If it’s wetter, though, and especially if you get a lot of this gray, wet weather that hangs around, that’s going to influence the vividness or brightness of the color that you get. It really is the sunny, cool conditions that trigger the development of the really vivid colors.”

Failing that, the colors will eventually change, but the palette could be muted.

Though plenty is still to be decided, Hagan said a long-term forecast of slightly above average temperatures and slightly wetter-than-average conditions should bring out the full array — eventually.

“Just to compare it to 2017, for example, we were coming out of a drought at the end of 2016 and then we had Hurricane Irma come up in September, we went into the fall that year and a lot of trees had already lost half their leaves and it was not a very good fall color season,” he said. “This year, they’ve got their leaves and, if we see that nice transition into fall like we always hope to see, and if we can avoid major windstorms like another hurricane coming up this way, it could be a very good season.”