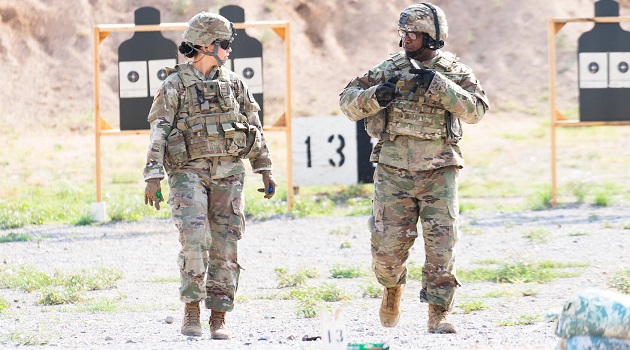 To Be a Veteran, a Female Veteran

As one can see, I come from a family full of veterans, many of whom have been deployed. We all have served our country proudly through wartime and peacetime. I joined the Army after I went to college for 2 years and figured out that I was not ready for college, and I still wanted to do something with my life, to experience life. I felt that I had to prove something. Not to my family, but to myself. I had to prove that I could “do this.” I even had several people who said “I wouldn’t make it.” The reason being, “because I was a girl.” Yes, I was told this. So off I went to basic training in the cooler winter of Fort Jackson.

Guess, what? I made it. Through cold temperatures, freezing rain and lots of sand, oh and let’s not forget the pine needles. One thing I did not mention, I was going through Basic Training during Desert Shield and then Desert Storm. While I was in training, my sister deployed to Saudi Arabia and my dad was recalled from his Army retirement to actively serve during Desert Storm/Shield. Which left my mom holding things down at home, but this is another whole story.

As noted earlier, I made it through training. I have to admit, I had great assignments. I started out with Temporary Duty in Indianapolis. From there I went to Fort Sherman, Panama at the Jungle School. This is where I learned about the sisterhood and brotherhood of the military. The soldiers I worked with, along with their families, became my family. We were a small unit, that did a lot. I had many adventures while I was in Panama, and got to know the people who lived in Panama. This is where I met my future husband, a soldier from another base in Panama. From Panama I went to Baltimore (Fort Meade, Maryland), this is where I reenlisted, and my last duty station was in Atlanta (Fort McPherson, Georgia).

It was in Atlanta, that I had to make some tough life choices regarding my Army Career and my family. While in Georgia, I had a child. I had a difficult birth, and my son was born prematurely. I was a single mom, in other words, and a single soldier who was a parent, a parent to a child who had some medical issues that made it difficult to be in daycare. And I was hundreds of miles away from family. So, at this point, I made the choice to move back home so that I had help for my son and got the medical care he needed. I transferred to an Army Reserve unit in my hometown and joined the workforce.

A few years down the road, I met up with that soldier I met long ago in Panama and we eventually got married. Once my contract ended with the Reserves, I moved to Michigan with him. At this time, I only really talked about my time in the service with him and if a job asked if I was a veteran I marked yes. Then 9/11 happened. My husband transferred from the National Guard back to Active-Duty Army. He quickly was deployed to Iraq for the first of many deployments. Me? Well, this is when I began the weird thing of not really saying anything about being a Veteran, including filing for disability with the VA due to injuries I did receive while I was in the Army. I kind of lost that identity. Why you may ask? One reason, I was now an “Army Wife” and was at home taking care of our family and working. And well, I wasn’t a war veteran, like my dad, my sister, and my husband. I felt that I didn’t contribute. And the recognition for female soldiers was not all that favorable at times.

It took me years, with the insistence of my husband, reconnecting with those “brothers and sisters” and others to feel that link again. I finally started to come out of that shell, which is still a work in progress thing, that includes the time it took me to write this. I am great at talking about how proud I am of my husband, my son, nephew and so on, easily, however, when it comes to my time in the service, it is still difficult. Part of this process was also connecting with other Women Veteran Groups and connecting with other fellow veterans. This also includes working with an organization, Celebrate Freedom Foundation, full of veterans helping veterans.

On a final note, it is not always easy being a female veteran, many forget that women do serve in the military, have been for years, and now many have been to war. It is improving, but there is still room for improvement.

I cherish my time in the Army. And I am now proud to say, “I am a Female Veteran.”