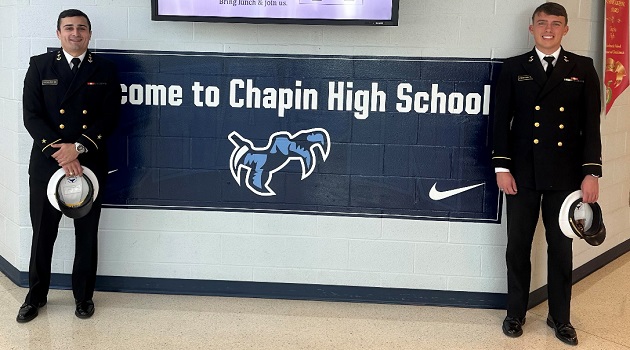 This week, students at Irmo, Dutch Fork, Chapin, and Spring Hill High Schools had the opportunity to meet with Midshipman 1/C Colin Creighton to discuss the process and requirements for admission to the US Naval Academy (USNA) in Annapolis, MD.

At Chapin high school, Creighton was joined by Midshipmen 1/C Giovanni Macaluso, a graduate of Chapin High, as they presented to an NJROTC class. Macaluso also was also able to visit Spring Valley High school, and Richland Northeast. As the undergraduate college of the country’s naval service, the Naval Academy prepares young men and women to become professional officers in the U.S. Navy and Marine Corps. Naval Academy students are midshipmen on active duty in the U.S. Navy.

They attend the academy tuition free for four years, graduating with bachelor of science degrees and commissions as ensigns in the Navy or second lieutenants in the Marine Corps. Naval Academy graduates serve at least five years in the Navy or Marine Corps. The USNA has produced more astronauts than any other institution with 54.

As a graduate of Spring Hill HS in his 4th year at USNA, Creighton was able to provide firsthand knowledge and guidance on the application process. He also gave the students valuable insights on the daily life of midshipmen at the Naval Academy. On November 17, Creighton and Macaluso were selected to be Navy Pilots upon graduation.

For more information on USNA and the application process visit www.usna.edu/admissions.