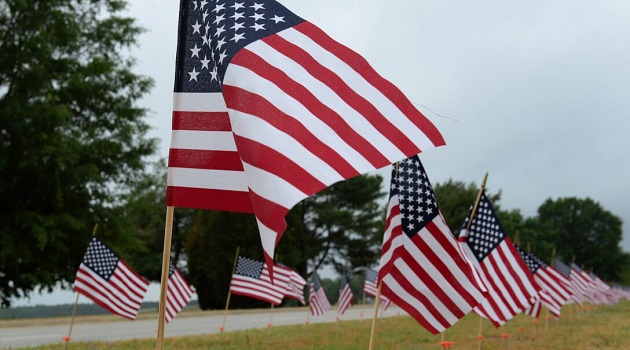 Veterans Day is a time to reflect on the men and women in uniform who have served our great country throughout its history.

Beginning in 1775 when soldiers fought to gain independence and first establish the United States of America, across the battlefields of World Wars I and II, Korea and Vietnam, Iraq and Afghanistan, and in the ongoing Global War on Terrorism, our servicemembers have bravely fought when their country asked.

More than 40 million Americans have proudly worn our nation’s cloth. Over 1.1 million have died, and an additional 1.4 million have been wounded.

America has liberated more countries for freedom than any in history, freeing citizens from national socialism, fascism, communism, and totalitarian rule. Freedom is not free.

Each veteran’s sacrifice is a noble one, but this Veterans Day we pay special homage to those whose service in Afghanistan, where 2,461 gave the ultimate sacrifice, keeping Americans safe for over 20 years, and provided thousands the opportunity to escape the oppressive rule of the Taliban and other terrorist groups. Your service made a difference in the lives of countless others.

These sacrifices are not borne solely by servicemembers. Since 2001, over 2.7 million have served on over five million deployments across the globe, supported by dedicated families.

All this to say, that all our veterans and their loved ones, past and present, are at the heart of our personal freedom and deserve our support and utmost respect.

I am grateful to support these brave men and women in Congress through the annual National Defense Authorization Act (NDAA).

Some recent bills I have introduced and championed include…

Repealing the ‘Widow’s Tax,’ a law that reduced the amount of financial support surviving military spouses could receive each month. The nullification of this legislation achieved the largest number of cosponsors, 383, of any bill this Congress, due to dedicated Gold Star Wives and veterans service organizations.

This effort was also personal to me. Lieutenant Colonel Joseph “Trane” McCloud, the military fellow in our office in 2003, was tragically killed in Iraq on Dec. 4, 2006. His wife, Maggie, and their three children continue to be on my mind and in my heart as we fought for the repeal of this law.

The fact that we have finally “Axed Widow’s Tax” is a welcomed accomplishment for the 65,000 families affected by this unfair offset. Following this win, on average, surviving families will receive an increase of $12,000 per year.

I am also grateful my bill, the Body Armor for Females Modernization Act, was included in the Fiscal Year 2020 NDAA. This legislation will reduce injuries to all our service members and increase their lethality by ensuring they can work with the right equipment from day one.

Fort Jackson trains more than 60% of all women entering the Army each year and they deserve the proper fitting of personal protective equipment from the day they enter the military – not just when deploying.

This year I introduced the Parris Island Protection Act to ensure this historic Marine Corps installation continues its critical readiness mission for generations to come.

Additionally, I am grateful this year’s NDAA adopted my bill, the Representation for Exceptional Military Families Act, which amplifies the voice of military families with children who have special needs.

I am also working to make it easier for deployed service members to return their absentee ballots by introducing the Reducing Barriers for Military Voters Act.

I continue to support efforts to expand health care benefits for children of servicemembers to age 26, and also extend the health care program of the Department of Defense, known as TRICARE, to all eligible National Guardsmen and Reservists.

Many of these initiatives were passed with the determined support of our nation’s military advocacy groups. Over the years, groups like the Military Officers Association of America, Partners in Promise, Blue Star Families, the National Military Families Association, and many, many more, have been critical teammates in supporting our veterans.

As a senior member of the House Armed Services Committee, a 31-year veteran, and father of four sons who have served overseas, my wife Roxanne and I extend our gratitude not only to the service members but also to those loved ones and caregivers who serve alongside them.

We understand the pride you have in their service, but also the longing and anxiety of extensive deployments. Not only do you hold down the home front while they are away, but support them through both physical and emotional injuries, some that linger long after they take off the uniform.

I take seriously my responsibility to safeguard our military readiness and will continue to support our service members and their families.

Your sacrifices on behalf of our country are appreciated.

Joe Wilson is a member of the U.S. House of Representatives serving South Carolina’s 2nd District.