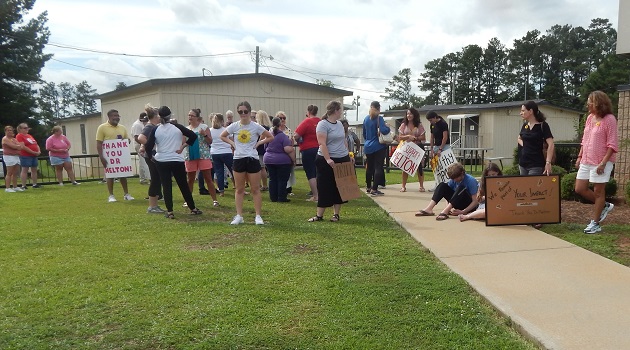 Ross is a former Chapin High School Principal who was named National Principal of the Year in 2018. He served as the district’s Director over Secondary Education before starting his own educational consulting service known as HeartED LLC.

He is currently leading the town of Irmo’s Youth Zone initiative to curb crime among young people.

“District Five is extremely fortunate to have Dr. Ross lead our District. He is a well-respected educational leader throughout the District, state, and our country,” Board Chair Jan Hammond said in a press release. “The entire Board is looking forward to working with Dr. Ross to continue our District’s tradition of excellence.”

But as the board was deliberating over the selection at the district office on Dutch Fork Road, some 30 to 40 parents and students gathered outside the building to protest the departure of Melton, who they believe was forced to resign.

Melton has not publicly stated she was forced to resign, but former board member Ed White blamed the board for her departure as he stepped down himself in protest. He said the board majority created a hostile and abusive work environment on Melton.

Board Chair Jan Hammond denies the board forced Melton to resign, saying she submitted her resignation voluntarily. She said the departure was a mutual agreement.

But many parents in the district disagree.

“She was fired,” said one parent in the protest group.

“The district is in uproar,” said another parent.

One parent held a sign that said “BOT Resign”.

Another sign said: “You are a disgrace to your citizens.”

Others held signs saying “impact” which emphasized the reach Melton had with students throughout the district.

Former board member Ellen Baumgardner, who was among the protestors, said Melton was being “micromanaged” by the board throughout the pandemic.

One parent, Beth Gossett, has launched a petition campaign seeking to get state officials to impose sanctions on a school board for removing a superintendent without public input. She says she has already collected about 1,700 and hopes to get 2,000. She plans to send the petition to the state Superintendent of Education and to lawmakers.

A spokesman for the education department responded the state superintendent’s office could not tell local elected officials what do. He advised the citizens to address the issue through the ethics commission.

Melton’s final day is June 30 according to the settlement agreement, but after the June 19 graduation she will use vacation days. The settlement shows Melton will be paid $226,368 to terminate her contract two years earlier than expected. According to her contract, Melton earned $175,000 a year.

Parents and students gather outside Lexington District 5 offices to protest the resignation of Superintendent Christina Melton. Photo by Al Dozier