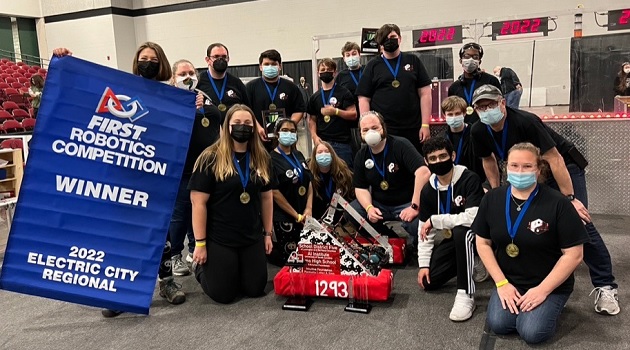 School District Five of Lexington & Richland Counties FIRST Robotics Competition team, the Pandamaniacs, placed first out of 38 teams in the Electric City Regional in Anderson, SC on March 9-12, 2022. The winning alliance teams included Cyber Tribe from Kingsport, TN, and the Secret City Wildbots from Oak Ridge, TN. In addition to taking the top spot in the competition, The Pandamaniacs also received the Imagery Award in honor of Jack Kamen, which celebrates attractiveness in engineering and visual integration.

The district robotics team is composed of high school students from ninth to twelfth grade from Irmo, Chapin, and Spring Hill high schools. After many years of coming achingly close, this is the Pandamaniacs first ever regional championship.

The team, led by physical science teachers Matthew Hedden from Irmo High and Robert Schiferl from Chapin High, work alongside other district teachers and adult mentors from industry to design, build, and test a new 125-pound competition robot each year in a two-month span. The program combines the excitement of sports with the rigors of science and technology in a uniquely exciting way.

“I am so proud of this team because they didn’t give up or really even complain at all when things didn’t go as planned,” Hedden said. “The team just kept fixing things and rebuilding the robot so that it could make the next match. That spirit, and a willingness to rebuild the robot again in the space of an hour, is what got us into the playoffs.”

This year’s challenge, RAPID REACT presented by The Boeing Company, sees two alliances of three separate teams work together to collect and launch 9” diameter balls into a central scoring hub in both a 15-second autonomous period where the robots operate on pre-programmed instructions and the
135-second teleoperated period where student drivers control the robot directly. At the end of the match, robots score additional points by hanging from bars of increasing height, some requiring climbing like monkey bars due to robot height limits.

The team’s robot, Pandamonium, was designed to collect the balls in a belt system that could tilt from the floor for collection up to the upper scoring hub to launch the balls before using the same collection arm to deploy the hanging mechanism. The ball system suffered a catastrophic failure on the field early in the qualification rounds, but the team pressed on by fielding just the bare drivetrain while working on an improvised structure to mount the climbers another way. Second-year driver Brandon Bravo, a senior at Chapin High School, demonstrated incredible finesse in moving to a pure defense role that was not only effective but almost perfectly free of fouls.

With the replacement climbing system almost ready, the team tested out the bare structure in its final qualification matches and found it made the robot too top-heavy for the defense that was becoming the team’s calling card. Once picked, the teams all agreed the additional scoring potential wasn’t worth the risk of tipping over. The team fielded its drivetrain again for playoffs, playing counter-defense to protect the alliance partners as they pummeled the upper hub through the quarterfinal and semifinal rounds. The finals were capped off with a close best-of-three series, where Pandamonium was able to neutralize the second-seeded machine of Team Fusion from Gulfport, Mississippi to help clinch the victory.

The Pandamaniacs are currently housed at Irmo High School International School for the Arts as an extracurricular activity group and is open to any high school student in the district.

2022-03-22
Previous Post: District Five board approves meeting calendar
Next Post: If your retirement plan was going to fail, when would you want to know?