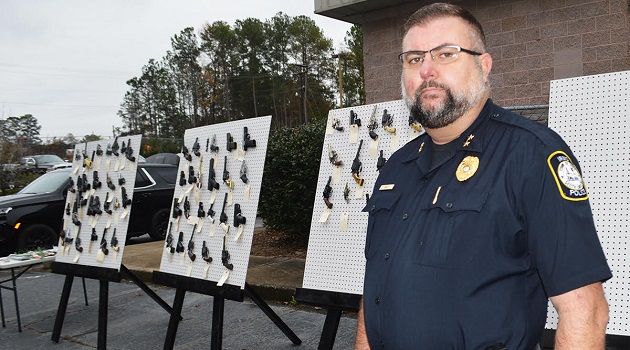 Irmo held a gun buy back program on Saturday, December 10 at the Universal Outreach Church located at 220 N. Royal Tower Drive. The event began at 10 am with a long line of waiting cars reaching from the parking lot of the church and extending around the block onto N. Royal Tower Drive.

The buy back program is designed to take unwanted weapons off the streets by offering a token price for neglected or often forgotten about firearms. Irmo Mayor Barry Walker said, “I kept reading stories about children going to middle school with guns in their book bags that they found in grandma’s house and this concerned me.”

Irmo Police conducted a very orderly exchange as citizens drove up to a receiving station to claim $125 gift certificates per firearm. Officers collected most guns from the rear of the vehicles and citizens were asked to remain in their vehicles. All weapons were checked for ammunition and rendered harmless during the exchanges.

“This was quite a response,” said Irmo Police Chief Bobby Dale during the event. “It’s a bit overwhelming but we’re handling it fine.”

Many shared stories about why they were giving up their weapons or thanked officers for holding the program. “One woman told me that a family member had access to a weapon in the home and committed suicide,” Chief Dale said. “She was thankful that we were doing this.”

This was the first gun buy back program offered in Irmo and some were concerned that maybe no one would show up. “It’s an unknown as to whether it helps or not,” said Chief Dale. “Compare it to taking a drunk driver off the road and by doing so we may have saved someone from a fatal accident.”

Richland County Sheriff Leon Lott has held four of these programs and wants to have more. “We had four assault rifles turned in last time,” said Lott. “That was the first time we saw those type of weapons coming off the streets.”

No ‘assault’ weapons were reported dropped off in Irmo.

The town had allocated $25,000 to the gun buy back program through the Okra Strut festival’s ‘reserve’ income from last year’s festival. Originally, the town received $50,000 in hospitality tax funds from Richland County Councilman Bill Malinowski who said he contributed that money to the Okra Strut Festival “for their Okra Strut promotion.”

The Irmo Police Department gave out 200 gift certificates at $125 each and had to shut down operations when funds ran out. “When the money was gone we had to close it down with maybe 50 cars still in line,” said Chief Dale.

Irmo Police collected 102 long guns and 98 handguns. “We’ll spend a couple weeks running all these guns through NCIC which is the national crime registry,” said Chief Dale. “This lets us find out if any were used in criminal activities.”

The majority of persons turning in weapons were from Irmo and close by communities. The mayor’s wife brought in a long gun for $125 and Councilman Malinowski turned in five weapons to the program for $625.

“I felt it was successful and that participants appreciated what we were doing,” said Chief Dale.