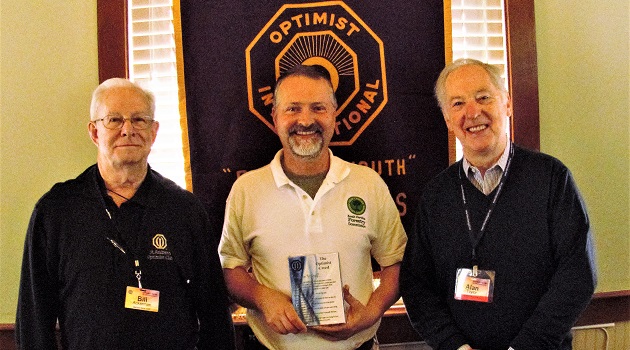 Jenkins is the Forest Health Coordinator for the state Forestry Commission. He is an expert in the field of forestry and he holds a doctorate in entomology. It was in the intersection of forestry and insects that Jenkins focused most of his presentation.

In South Carolina, we experience occasionally extreme weather conditions that affect the health of our forests. Jenkins pointed out the death rate of trees is almost exactly equal during times of flood or drought. He stated our state is only one month away from drought conditions at any time.

He classified other threats, primarily from insects, as either native ones or invasive ones. The most widely known and experienced native threat is that of the Southern Pine Beetle. Its pattern is to attack distressed or weakened trees, where it does not necessarily “hop” from one tree to an adjacent one. Rather, it victimizes the most vulnerable trees.

The invasive species Jenkins spent considerable time profiling is the Emerald Ash Borer. He referred to the borer as the most destructive of all time. It attacks trees in a similar manner as the Southern Pine Borer, consuming tree matter under the bark to the point where the tree cannot carry its nutrients upward. It is a slender, oblong insect with a metallic green coloration. It differentiates itself from the pine borer by attacking perfectly healthy trees. The Forestry Commission is working now on finding a treatment.

A second invasive is the Asian Longhorned Beetle, which is black with white dots on its body. Its main targets are maples and Elms. The only effective remedy so far is to remove the infested tree entirely. As it turns out, Charleston is the current epicenter for this insect’s activity. So that location serves as a case study for other regions that may experience it. Jenkins said the reason for the proliferation of this particular pest is that its Asian home shares a geology that is similar to ours.

Regionality plays a role in the spread of many of the invasive sepcies Jenkins listed. An insect that lives in a certain variety of tree in another part of the world with no ill effects can be transported somehow to the U. S. and do tremendous damage to a tree of the same name.

A last subject Jenkins touched on was portability in firewood within the U.S. borders. When bringing firewood from one region to another, it is safest to bring or buy locally a supply of kiln-dried firewood. Otherwise, there is a chance of bringing unwanted pests within the wood.