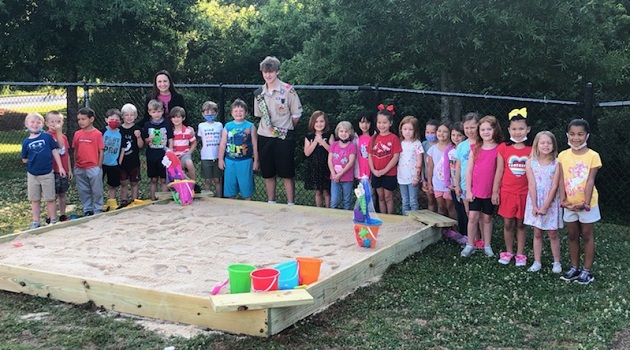 Brooks is teaming up with Chapin Elementary School to improve the school’s playgrounds by adding two sandboxes to the kindergarten playground and repainting and adding hopscotch and four square games on the campus.

Brooks is a graduate of Chapin Elementary School and his sister currently attends the school, which is why he chose it as the location for his Eagle Project.

“I moved to Chapin about 9 years ago from Chicago and Chapin Elementary was the first school that I could remember,” said Brooks. “I had a lot of fun here and I met most of my friends, that I still know today here and I wanted to give back to my community.”

Brooks enlisted the help of his parents, siblings and friends to help him complete the project.

“I am so thankful for all of their support,” Brooks said. “It takes a lot of hard work to become an Eagle Scout and It makes the job easier when you have friends and family to help you reach your goal. I know all of the hard work and dedication will pay off in the end.”

Chapin Elementary principal Jess Hutchinson says he and his students are very excited about this opportunity and the finished product.

“One of my favorite things about our school district is we have so many families that are invested in the school district and in the community and they want to help do things to help better our schools,” Hutchinson said. “In this case, we have a student who was a student at Chapin Elementary who is not even in high school yet who felt the desire to come back to his elementary school and give something back. It just fills the heart to see that.”