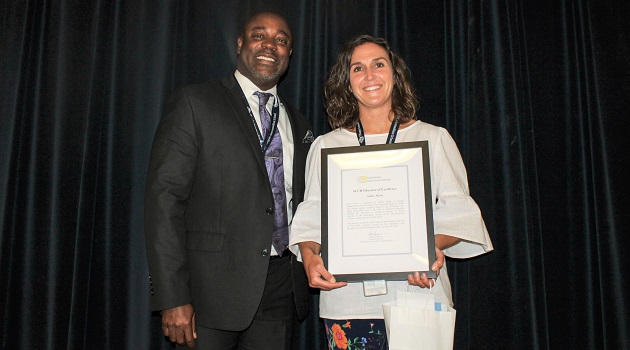 Lexington-Richland School District Five fifth grade teacher Ashley Metts was named the 2022 Holocaust Educator of Excellence by the South Carolina Council on the Holocaust during a surprise announcement at Chapin Intermediate School.

The award is given to educators who exhibit a passion for teaching the meaningful lessons of the Holocaust to their students.

“I recently learned that my great-grandparents were survivors of the Holocaust. They were put in concentration camps because they disagreed
with Hitler, which makes teaching about the Holocaust personal,” Metts said. “I want my students to understand that along with the innocent lives that were lost, families, cultures, traditions, heirlooms, and stories were lost as well. As a nation, we need to remember this event so that we don’t allow it to happen again. I hope that I provide my students with the tools needed to accurately explain the what, the why, and the impact of the Holocaust, as well as enough knowledge and resources to find the answers to the questions they have.”

In addition to receiving a framed certificate of her award, Metts was also presented with a $500 check and a $500 grant to use toward classroom
resources. This is the second year the South Carolina Council on the Holocaust has awarded the honor to teachers in the state.

Metts plans to use the classroom resource grant towards additional read alouds, grade level appropriate novels, and Jackdaw Primary Sources on the
Holocaust.

Scott Auspelmyer, the Executive Director of the South Carolina Council on the Holocaust, states, “Ms. Metts exhibits a passion and dedication
to her students and to Holocaust and human rights education that is to be commended. The lessons she teaches will impact her students far beyond the time that they are in her classroom. She is the embodiment of what a quality teacher is and what we should celebrate and we are pleased to present this award to her in honor of her efforts.”

The South Carolina Council on the Holocaust was established in 1989 through a state legislative mandate. It operates in collaborative partnership with the state legislature and the SC Department of Education to promote awareness about the Holocaust and to honor the survivors and concentration camp liberators who call South Carolina home. To this end, the Council supports teacher training programs, special events that discuss Holocaust history, human rights, and genocide, and annual Holocaust commemorations around the state.