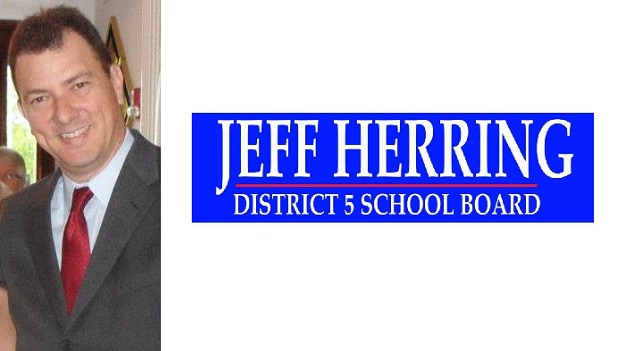 Jeff Herring to run for school board

Local businessman and community volunteer Jeff Herring has filed as a candidate in the Oct. 12 special election for the Lexington-Richland District 5 school board.

Herring – a graduate of District 5 schools and the father of a Spring Hill High senior — is running for an open Richland County seat on the board.

“I’m running because I care deeply about our community and because I honestly feel I can do a great job if given the opportunity,” said Herring. “I believe I have the qualifications, the dedication and the work ethic to make a meaningful difference.”

Herring is a lifelong resident of the Irmo-Ballentine-Chapin area, growing up in Friarsgate and Coldstream. He graduated from USC, earning a degree in economics with a minor in education.

Herring said he has three main goals as a board member: ensuring student safety is always a board priority; keeping schools strong by focusing on students’ and teachers’ real classroom needs; and improving fiscal oversight to prevent costly mistakes and protect taxpayer dollars.

“Nothing’s more important than the safety and security of our children,” he said. “Any safety concerns that arise must be dealt with openly, honestly and directly — not swept under the rug.”

Herring said he’s committed to preventing the kind of financial and construction-related missteps that have plagued District 5 for the past decade – from improperly awarded contracts to mismanaged construction projects.  He cites the spending of $1.2 million on land and architectural work for a school that was never built as an example of the need for more stringent oversight of district operations. That project was abandoned because the site lacked road access.

“That was a costly mistake that hurt students and hurt the taxpayers. It could have been prevented by an ounce of due diligence.”

Herring, whose family consists of several educators and a retired nurse, served as a student-teacher while at USC, said preserving District 5’s status as the state’s best school system will take a renewed focus on students’ educational needs. Hiring and retaining teachers is a vital issue. “We’ve got to direct our energy and resources where they’re needed most – the classroom.  The board’s priorities need to be on issues that directly impact students and teachers.”

Herring’s community involvement includes serving on the Chapin Middle and Chapin Intermediate school improvement councils. He’s active in his church and in the Ballentine Dutch Fork Civic Association. The Herrings are especially active in efforts to support local law enforcement, including sponsoring the Richland and Lexington County sheriff’s department’s K9 units. Jeff has been married to his wife, Stephanie, for 27 years and they have one daughter.

2021-08-17
Previous Post: Strategic incompetence in the fall of Afghanistan
Next Post: Capital City/Lake Murray Country Celebrates 40 Years and Many Accomplishments